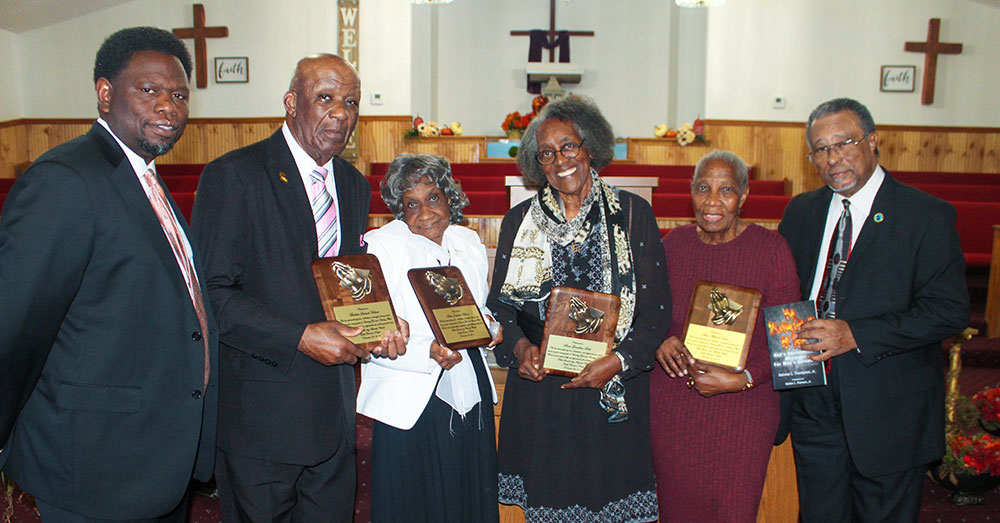 BATON ROUGE, LA. – For weeks it was promoted as just a “Friends and Family Day,” and that is all that some unsuspecting guests and members of the Faith Seventh-day Adventist Church expected.

Thus it was not until at the beckoning of their pastor, Joseph Footman, that deacons began bringing out elaborately covered chairs, lining them up front. Then he announced, “I firmly believe in the adage that we should give a person his/her flowers while they can smell them. With Proverbs 16:31 in mind, as I call their names, please escort Faith church charter members, Sister Geraldine Bell, Brother and Sister Roosevelt and Mildred Dunn and Samuel and Josephine Holmes.” Family members and friends privy to the surprise recognition escorted and stood behind the honorees as Footman and staff presented each with a personalized plaque followed by floral arrangements, testimonies and congratulatory messages.

The obviously grateful cast–all in their 80s–could hardly contain their jubilation as they posed for pictures and made their way through a standing, applauding audience as they returned to their respective pews.

Guest speaker Helvius Thompson, emeritus pastor, followed with the message, “But A Short Time.” With Revelation 12:10-12 as his scriptural focus, Thompson shared the cosmic conflict between good and evil. “No longer can Satan remind us of our past because we now have a future. Even though Satan is no longer a problem in Heaven, he is for the inhabitants of Earth,” said Thompson.

Using the analogy of the two minutes’ final warning play in football, he reassured us that we will overcome the devil by the Word of Christ through His blood. “God’s message to Satan is the message to us; but unlike football, our time will be one for eternity; no devil, no wicked people, no death.” After Thompson’s timely message and with the honorees leading the processional, the congregation made our way to the dining area where we celebrated with a wonderfully prepared, scrumptious meal. The Faith church thanks God for its honorees and the blessing they are to His ministry.