Remembering Our Past, Moving Forward for the Future 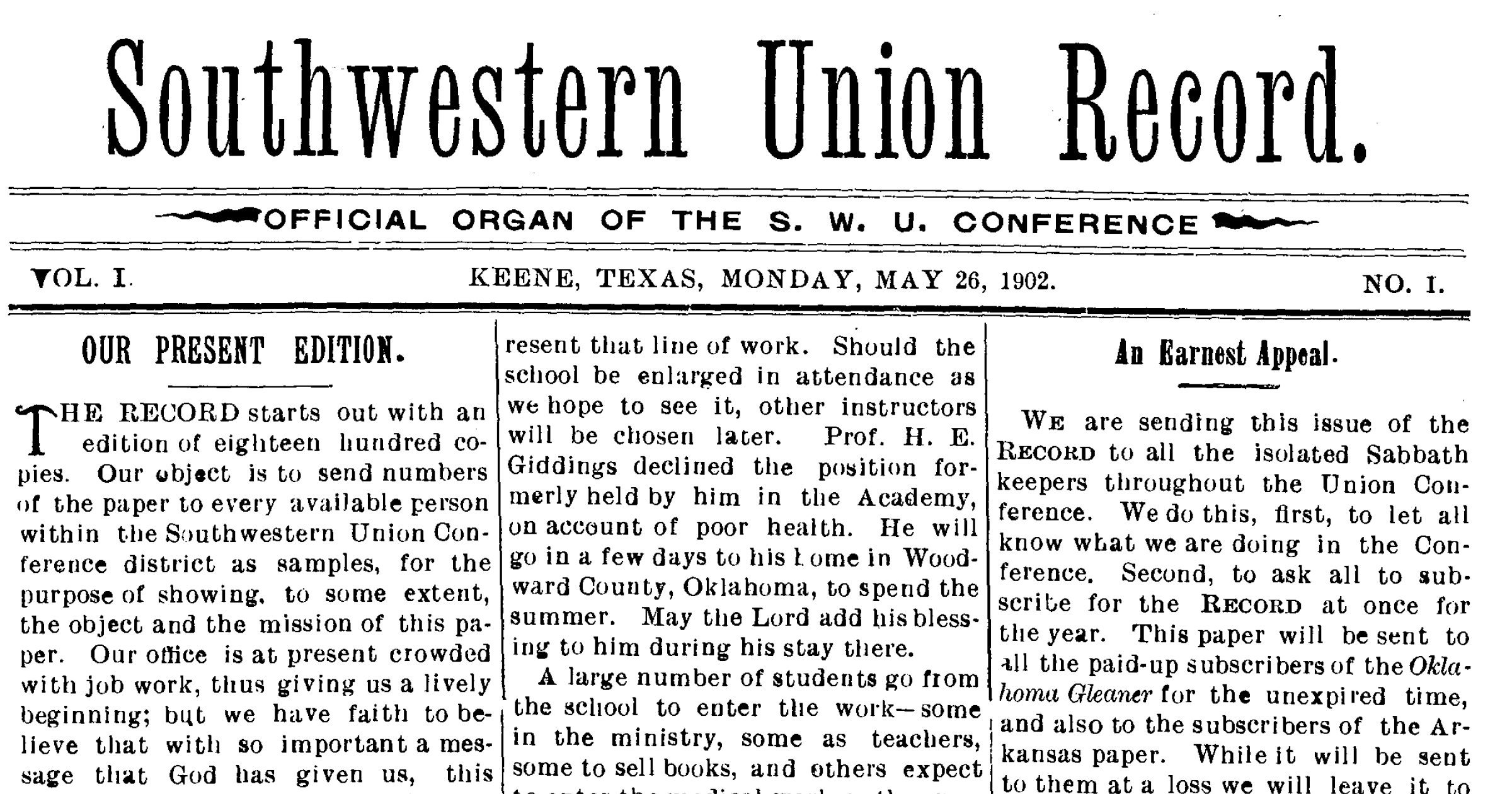 This inaugural edition was eight pages of handset type, which was mailed to 1,800 households across the five states of the territory. The paper merged the Arkansas, Oklahoma and Texas conference newsletters, as well as the Keene Industrial Educator, into a single edition with the purpose of sharing news with Adventist members who would find hope in reading a robust collection of news, testimonies and activities of fellow members from across the territory.

The managing editor of this new publication, G. G. Rupert, wrote, “The printed page should fall like autumn leaves. There is no line of work so encouraging as this. It brings the truth directly to the people.”

From the beginning, the publication relied on members to share what was happening within their local communities with their broader Adventist family, and they did this through testimonies and news of events in their churches and schools. The Record continued as a printed weekly journal for the next 64 years, sharing news notes about new churches and schools, scriptural inspiration, poetry, healthful tips, and, as was common for local newspapers, sharing where various members were traveling and who they were visiting each week.

In 1966, the decision was made to print 24 issues with more pages, rather than 52 weekly leaflets. That same year, the paper’s first full color cover emphasized the theme of the 1966 union theme, “A world mission, yet...a UNION obligation!” The cover (pictured right) depicts the local territory of the Union over the global mission field and the gospel commission, indicating the need to focus locally before moving outward with mission. The hand-painted cover was created by Forrest Rees, a member and staff artist at the College Press in Keene.

The paper continued to its dedication as an ever-growing communication channel for the ministries of the Union. In 1989, the Record became a monthly magazine, and with the advent of the Internet and digital media and the slow decline of print media in the 2000s, the magazine continued to be the mainstay of the Southwestern Union’s communication channels, while at the same time adding digital and social platforms.

Currently, the Record magazine is available as a 52-page bi-monthly print magazine delivered to every Adventist household in the Union, with inspirational and news content from each of our five conferences, ministries, and educational institutions. Because of the need to reach members and a broader audience through digital platforms as well as through the printed magazine, this news and inspiration is also shared with an online community through social platforms such as Facebook and Instagram, as a digital magazine that can be subscribed to through ISSUU.com, and through our website, SWURecord.org.

The look and feel of the Record has changed significantly over 120 years, from single sheets of inky paper to a colorful, glossy magazine, to a desktop computer or a cell phone screen, but its mission remains: to connect and inspire members, be they few or many, to remain faithful, to be encouraged and equipped to fulfill the gospel commission, and to be assured of their fellowship in the body of Christ.