Jesus is the divine promise fulfilled. God made this pledge after man fell into sin (Genesis 3:15). A cosmic controversy had started before the creation of planet earth and all its components. 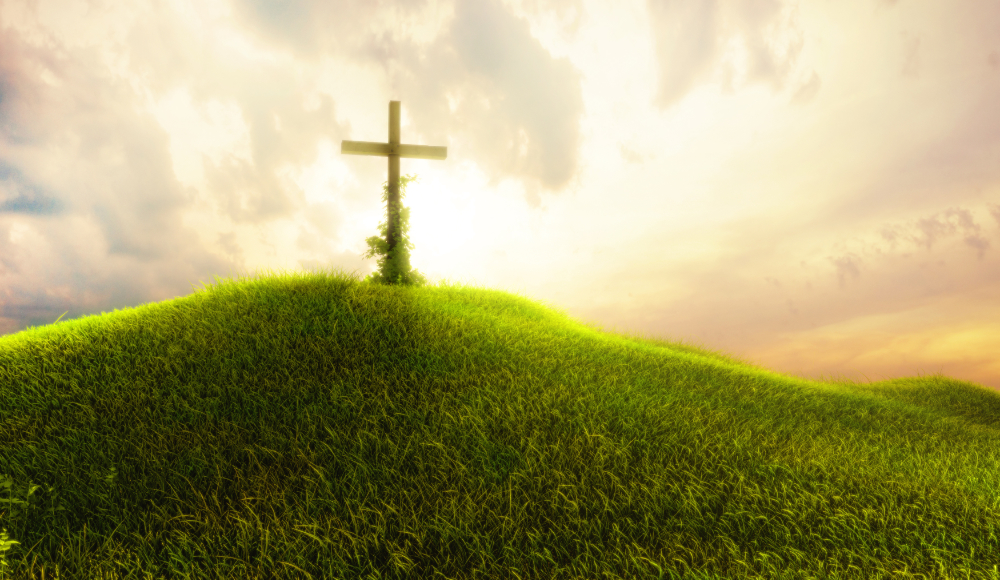 Jesus is the divine promise fulfilled. God made this pledge after man fell into sin (Genesis 3:15). A cosmic controversy had started before the creation of planet earth and all its components. A beautiful and mighty angel decided to rebel against the Creator and His government (Ezekiel  28:14-18; Isaiah 14:12-14). The existence of this conflict is alluded to in the creation account. When God created man, among other things, He told Adam to have dominion over His entire newly created world (Genesis 1:26). The phrase “to have dominion” comes from the Hebrew verb radah, which means to maintain control and to keep in harmony. The Lord’s command is reiterated a bit later with an added idea. Besides having dominion, Adam had to subject the earth (Genesis 1:28). The Hebrew verb translated “to subject” is kabash. It means to subdue by force. Kabash is generally used in the Old Testament in the context of a conflict or war. The victorious individual forces the loser to be subjected under his rule (Numbers 32:22, 29; Joshua 18:1; 1 Chronicles 22:18; 2 Chronicles 28:10; Nehemiah 5:5; Jeremiah 34:11,16).

This concept is significant for the creation narrative. It means that there was a controversy waging in the universe that could possibly affect God’s new creation. If Adam was defeated, he would lose God’s given dominion and the earth would no longer be in harmony with the Creator’s principles. This condition would, out of necessity, require a member of the deity to come to earth, defeat Satan, and bring God’s creation back in line with the principles of heaven. Old Testament writers described this divine person as coming with a rod of iron to subdue His enemies (Psalm 2:6-9; 110:1-2; Isaiah 11:1-4; Numbers 24:17).

The early allusion to a great conflict becomes clearer in Genesis 2:16-17. God commanded Adam not to eat from the tree of knowledge of good and evil. Failure to obey would result in death. Unfortunately, the first couple disobeyed (Genesis 3:6) and were condemned to die. The Lord had three options. First, He could destroy the first couple as He had warned. Second, He could invalidate the command in order to release them from obedience to His law. After all, without law, there is no sin (Romans 7:8). Third, He could take their place and die for them. Because God chose the third option, Adam and his descendants have the hope of restoration to the Edenic condition.

God’s election is notified to both Satan and the first couple (Genesis 3:14-15). There is only one difference. Whereas God’s pronouncement was a sentence of destruction for the devil, it became a promise for Adam and Eve. The seed of the woman will come to crush the serpent’s head. The imagery behind this pledge is quite significant. It describes the promised Savior as standing in front of the serpent to step on its head. Rather than using other means to kill the serpent, He uses His foot to crush the serpent’s head. The act of stepping is meaningful because it indicates that the Redeemer will reclaim ownership of His creation (see Deuteronomy 11:24; Joshua 1:3; 14:9). Unfortunately, the divine action will not happen without consequences. The serpent will strike back and hurt the seed of the woman in His heel. This attacked implies that the Savior will have to be sacrificed in order to defeat the enemy and redeem humanity.

Before evicting them from Eden, God ratified His promise through a significant event. He removed the couple’s coverings that were made out of leaves and covered them with animal skins (Genesis 3:21). The use of skins clearly indicates that a sacrifice was made and that an animal had died in their place. This event served as a type of the future sacrifice of the Son of God to save humankind (1 Peter 1:18-20; Revelation 13:8). What a wonderful divine promise was made to humankind! The practice of sacrificing animals continued throughout centuries until the coming of the promised Seed (Galatians. 3:19). When the fulfillment of time came, God sent His Son to redeem those who are under the law, that they may receive the adoption of children (Galatians 4:4-5).

Jesus was the fulfillment of God’s promise. From the beginning, His life, ministry, and sacrifice revealed a continuous controversy with Satan and his demons. The devil made every attempt possible to prevent Christ’s sacrifice on the cross. From trying to kill Him in Bethlehem, to offering Him an easy way in the wilderness of Judea to recover this world’s dominion, to inflicting in Him all kinds of emotional and physical abuse, Satan tried to impede the fulfillment of Genesis 3:15. Notwithstanding his efforts, Jesus died on the cross and rose from the dead on the third day, triumphing over His evil enemies.

Jesus is a living Savior who is now in heaven interceding before the Father on behalf of man (1 John 2:1) and making all heavenly power available to His children on earth (Matthew 28:18). Now it is possible to overcome Satan through the blood of the Lamb of God (Revelation 12:11). This good news must be proclaimed at all times through the spoken and written word. It is this news that changed my life and impacted my ministry in a meaningful way. Because of this good news, I continually ask God to help me become a life-changing agent for my brothers and sisters in church, and for my students in the classroom.