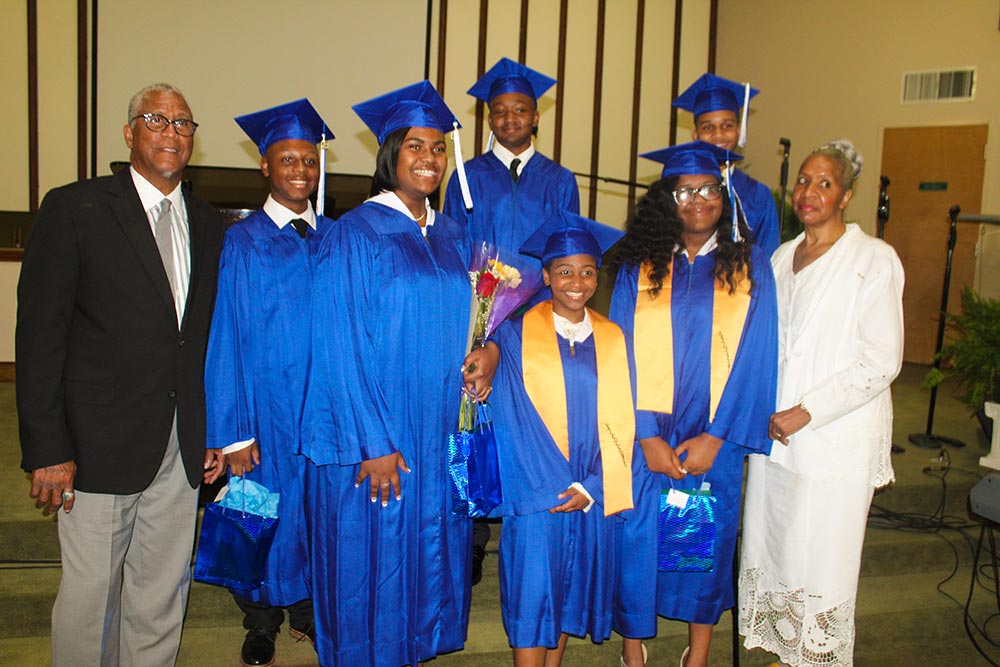 The kindergarten theme “Under Construction: Building on a Solid Foundation” dominated the gymnasium/auditorium which had been transformed into a construction site replete with yellow and black signs. Even the aisle for the graduates’ processional was converted into a street.

The pre-K 3 and pre-K 4 students, in nursery rhyme costumes and construction worker attire respectively, awed the audience with their recitation of nursery rhymes and their portrayals of different professions. The graduates’ drill included rhyme time, a demonstration of the four R’s, social studies, months of the year, along with several songs. Kindergarten lead teacher, Deloris Newman, and Sibyl Jordan, principal, awarded diplomas to a valedictorian, two salutatorians, three honors students and the five remaining graduates.

The six-member eighth grade class featured Jalyn Jordan (pictured left) and Semaj Sadler (pictured right) who had attended the school for eight years. Like the kindergarteners, the students’ recitation of the MLK creed was a part of the ceremony.

Joseph Footman, pastor of the Faith Seventh-day Adventist Church, challenged the graduates with his message “Stand.” Utilizing Daniel 3:16-18 of the three Hebrew youth’s experiences, he cautioned the graduates to “Remember your training; stand up and do not bow to pressures that come your way. Social interactions will cause you to take a stand. But remember, you can succeed no matter where you go to school. Those who stand will walk in the fire and not be consumed. God wants to use you; stand for Jesus.”

Following this message, Sibyl Jordan and Mack Jordan invited parents to meet their respective graduates at the altar where T. Ron Weegar, pastor, prayed for them. Diplomas followed with recognition of Jalyn Jordan as valedictorian and Semaj Sadler as salutatorian. Berean is quick to glorify God as He continues to bless its education program.