A Festive Day for Friends, Faculty and Students 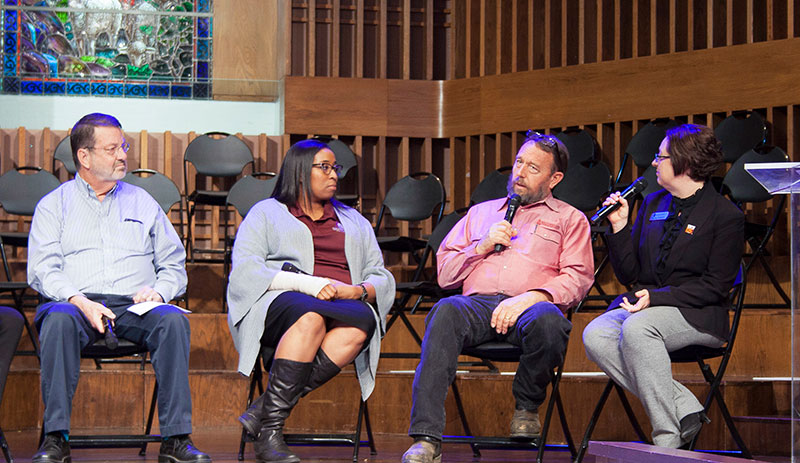 The celebration started the day before with an interactive, campus-wide scavenger hunt that gave student participants the opportunity to win prizes which were awarded during the weekly student assembly on Thursday afternoon.

A panel of current and former staff and alumni consisting of Bob Mendenhall, Bev Mendenhall, Bugger Putnam, Dale Hainey and Kisha Norris answered questions from Amy Rosenthal, vice president for academic administration. Antique images, displayed on the screen, included Keene’s old broom factory, old bands, the university’s former indoor swimming pool, a time when Leiske-Pultar Gymnasium didn’t have walls, the Cowabunga Skiers, the Pioneer Memorial Tile Mural, and the fountain outside Findley Hall.“I’m glad I didn’t have to work in a broom factory,” Gabby Behrens, senior communication major, said after the assembly. “After seeing what students did to get through school, I feel like I have it a little easier than they did. It’s still hard. Don’t get me wrong!”

Cristina Thomsen, library director, came to Keene from Colorado in 1963 when her father, Eugene Thomsen, was hired to teach languages. “Keene was much smaller back then,” she says. “It felt more rural. There was a dairy. There were cows everywhere. Cows would always wander into our backyard.”

Thomsen considers Founder’s Day a “wonderful idea.” “It’s always great to stop and remember how we’ve gotten to this point.”