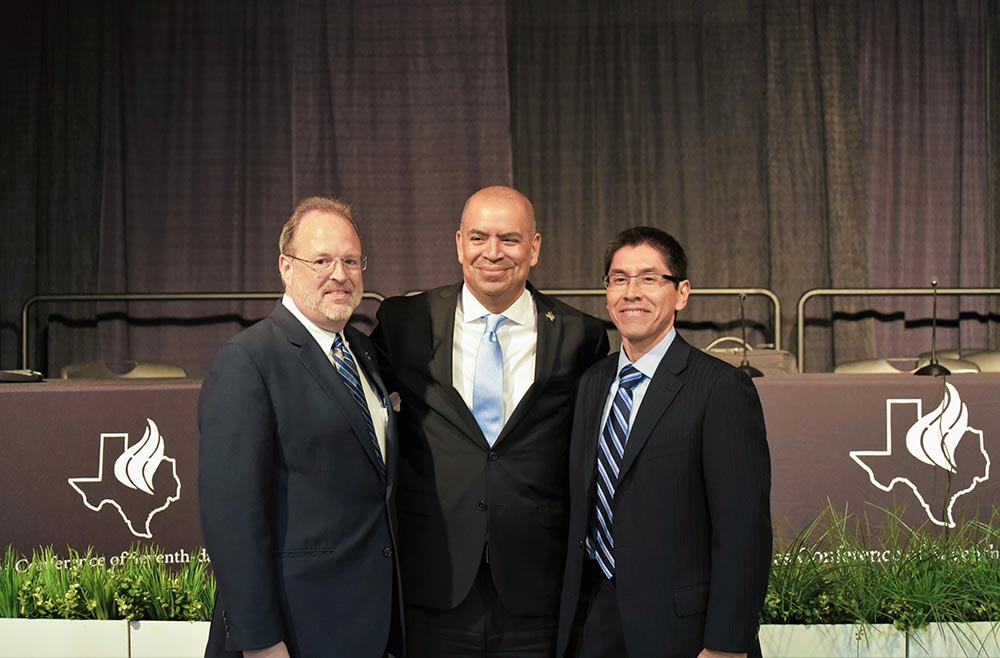 BURLESON, TEX. – The Quadrennial Session of the Texas Conference of Seventh-day Adventist was held in Bryan, Texas on May 19, 2019. Delegates gathered to elect conference officers and directors for the next four-year term, as well as vote items pertaining to Adventist education and the Valley Educational Foundation (VEF).

The day began with a devotional by Carlos Craig, followed by a special recognition for John Hopps who recently retired after nearly 49 years of service in Adventist education. His 43 years in Texas include 11 as an Associate Superintendent and five as the Education Superintendent for the Texas Conference.

After officially adding six new churches to the sisterhood of churches, who were organized from April 2017 to April 2019, administration reports were presented from the offices of the president, secretary and treasurer.

Southwestern Union President Larry Moore introduced the Nominating Committee report to the delegates and the following positions were confirmed.

Carlos Craig then shared about the work of the Texas Adventist Education Advancement Committee, a group of individuals tasked with studying and making recommendations regarding Adventist education. The minutes of the Education Advancement committee’s meetings had been shared to the delegates in their delegate’s packages. Craig shared the committee’s resolve to continue working throughout the next quadrennium to grow and strengthen Adventist education.

The meeting continued with the delegates entertaining items pertaining to Adventist education. After discussion and majority vote, the following items were approved: 1. To petition NAD to allow for a variance from 30% to 50% (sliding scale going up 3% each year) for teachers’ salaries. 2. A 5% tithe rebate of total tithe from each church to return to churches yearly (funds to be taken from working capital). When the working capital drops below 120% the rebate will be limited to 1-5% (sliding scale). This will ensure safeguards for the working capital.

The Valley Educational Foundation constituency session opened and the VEF Audit report for 2015-2018 was shared and accepted. Carlos Craig explained that the VEF had been established to manage funds from the profits of Valley Grande Manor for Valley Grande Adventist Academy (VGAA), which closed several years ago. After discussion the delegates voted to approve the dissolution of the VEF. The VEF Constituency Session closed, and the Texas Conference Constituency Session reopened.

Randall Terry presented an appraisal of the VGAA property, which encompasses 17.75 acres in Weslaco, Texas, adjacent to the Weslaco Church. The property was appraised at $3.45 million.  Carlos Craig explained that the property still incurred significant costs through maintenance and utilities but had been deteriorating for some time. Based on VGAA’s history, the prospect of having another boarding academy on the property was very unlikely. After discussion the delegates voted to approve to sell the VGAA property, and have proceeds placed in a fund for Adventist education. Recommendations and requests were made to give the Weslaco Church consideration and priority regarding a portion of the property and that 50% of the proceeds from the sale of the VGAA property be given to Valley-area churches for Adventist education. The meeting came to a close and the administration thanked the delegates and staff for their work during the day and dismissed the meeting with prayer. Congratulations to those individuals elected to serve the Texas Conference for the next four years. We pray for God’s guidance and blessing to be over them, their families and the ministry of the Texas Conference.