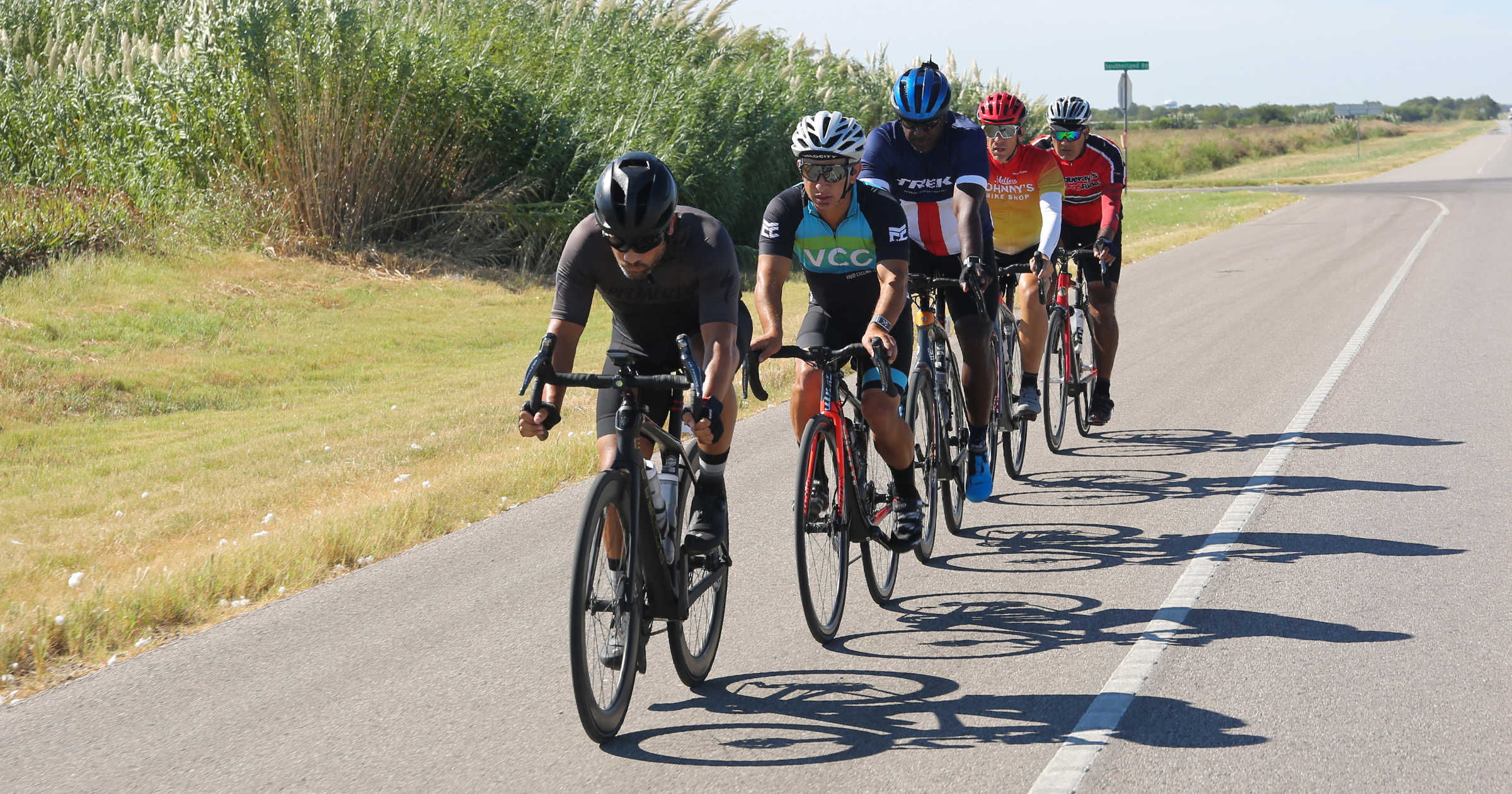 ALVARADO, TEX. – Ten cyclists, two from California, one from Florida and the rest from Texas, rode 800+ miles from McAllen, Tex., to Richardson, Tex., to promote health and raise awareness and funds for a Seventh-day Adventist education endowment. With the goal of raising $1.5 million, the endowment will provide financial assistance for anyone desiring to attend a Texas Conference school.

Texas Conference President Elton DeMoraes was there on Sunday, Sept. 12, 2021, before 6 a.m. to see the cyclists off and pray for their journey.

This is the fifth time for several embarking on these week-long rides created by Kenn Dixon, Texas Conference vice president for Communication & Public Relations, but it was the first time the fundraising cycling tour was two weeks.

Due to injuries sustained while in active duty serving in Marine Corps Security Forces, Dixon was limited to the exercises he could perform to maintain his physical health. Eventually, cycling became his main option so it was only natural when someone recommended creating a cycling tour.

Dixon joined the Texas Conference in the summer of 2019 around the same time Kisha Norris was elected Texas Conference vice president for Education. The seed was quickly planted for Dixon to create a cycling tour in Texas as Norris had assisted him with previous cycling tours.

“If it helps our young people, I am all in,” Norris stated. “My mother was Determined (the theme for the event) to see that I had an Adventist education, so I am honored to help others.”

Antonio Correa, one of the pastors at the McAllen Spanish Valley Central Seventh-day Adventist Church in McAllen, Tex., joined the ride. He was overwhelmed by the generosity when someone offered to purchase a bike for him and then cover the suggested $3,000 goal for cyclists to raise to cover expenses and support the Seventh-day Adventist education endowment.

Stopping at schools along the way was a highlight for the cyclists and increased their determination. Besides refueling them with food, the students’ excitement and signs energized everyone. Since the cyclists couldn’t visit all the schools, they really appreciated the collaboration of schools to come to the nearest school stop location. The stops included (9/11/21) South Texas Christian Academy in McAllen, Tex., (9/14/21) Coggin Memorial School in Corpus Christi, Tex., (9/17/21) Houston Adventist Academy in Cypress, Tex., (9/20/21) Stonehill Christian Academy in Pflugerville, Tex., (9/21/21) Killeen Adventist Junior Academy in Killeen, Tex., (9/23/21) Chisholm Trail Academy in Keene, Tex. and the grand finale stop (9/24/21) North Dallas Adventist Academy in Richardson, Tex.

Churches also made a tremendous impact by providing meals for the cyclists and support staff. Besides delicious food, the enthusiasm of the church members was infectious. Thank you to the following Seventh-day Adventist Church members in Texas for taking the time to prepare a meal and visit with the cyclists and support staff: (9/10/21) Edinburg, (9/11/21) McAllen Spanish Valley Central, (9/14/21) Corpus Christi Annaville and Downing Street, (9/15/21) Alice, Beeville and Victoria, (9/19/21) Elgin, (9/21/21) Killeen Spanish, (9/22/21) Waco and (9/23/21) Cleburne First.

Director of Medical Nutrition Therapy and Food Service for the State of Texas Wayne Webb has been the chef for four of the five cycling tours. He was excited to learn the Hurst Seventh-day Adventist Church in Hurst, Tex., allowed their Back to Eden food truck to be used for the cycling tour.

As the cyclists rounded the final corner arriving at North Dallas Adventist Academy in Richardson, Tex., on Sept. 24, 2021, the students, staff and community members cheered their accomplishment. It wasn’t easy, but they made it.

All along the route, people gave online to raise the first $100,000 toward the $1.5 million Adventist education endowment. Others mailed checks.

Two Texas Conference churches, Edinburg and Weslaco, each contributed $5,000 bringing to light that if each of the 300+ churches in the Texas Conference gave that amount, we would already reach our goal.

The next cycling tour is scheduled for April 3-9, 2022. Find more information or ways to give at TexasAdventist.org/Determined.

Together, we can make an eternal difference for the young people in the Texas Conference.