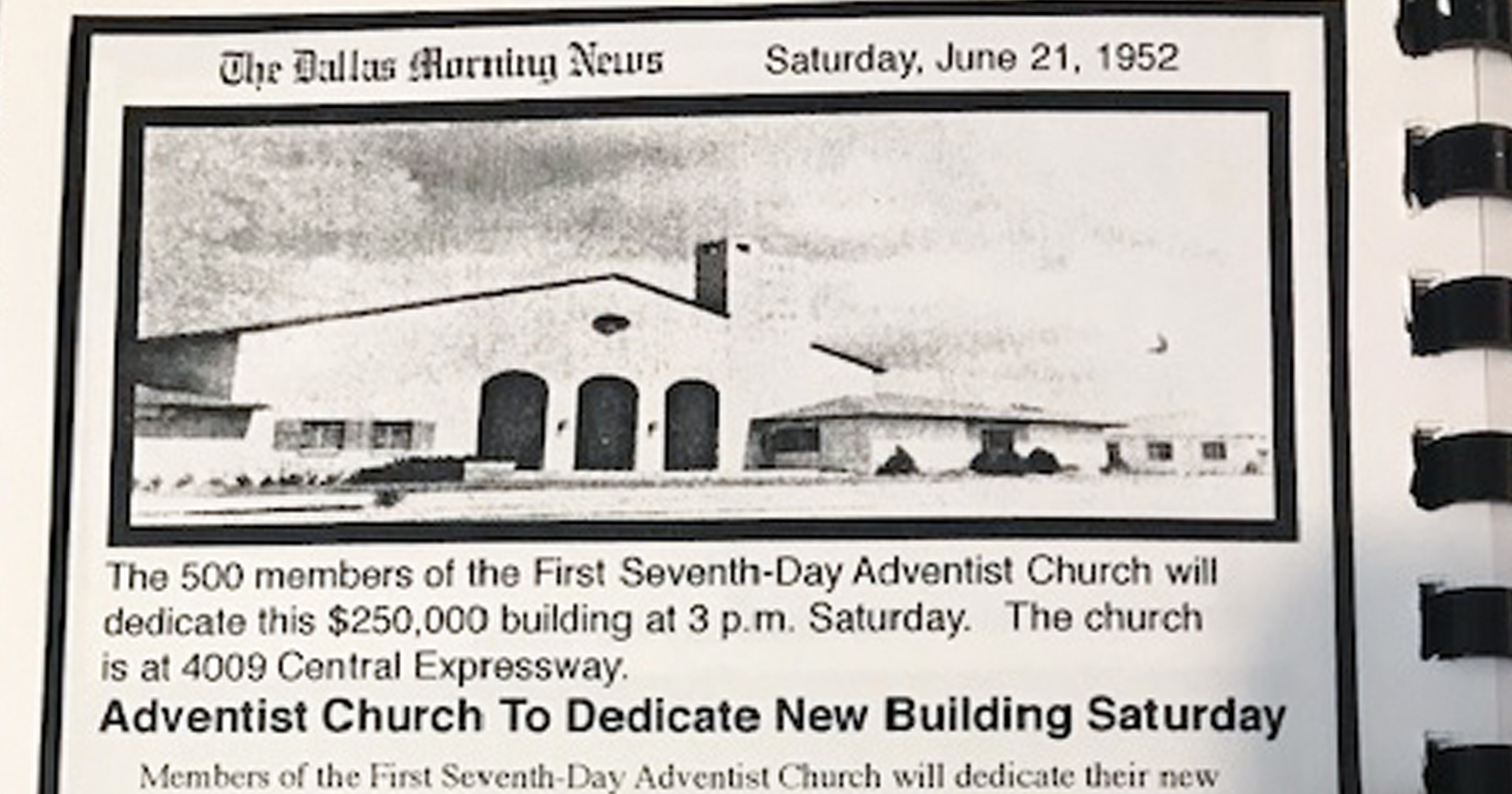 DALLAS, TEX. – On June 17-18, 2022, the Dallas First Seventh-day Adventist Church (DFC) will celebrate its 70th Anniversary at their current location on North Central Expressway. DFC has its roots on Gano Street, just three-and-a-half miles away. It was established there in 1876 with a congregation of 18 members. They started what is now known as Dallas Christian Academy, and later built a two-room school on the lot next door for the school’s 12 children.

As their membership grew, the church moved their congregation of approximately 125 to a property at 2900 Live Oak Street.

“I remember going to Sabbath School in an upstairs room in that church,” says Tomasia Leatherwood, DFC’s resident historian, who has been part of DFC her entire life. It was in those same classrooms that the church school met during the week.

In 1950, DFC moved to its current location across five lots, and later that same year a church school building was erected. Leatherwood was baptized there at age ten in 1953.

“It is astonishing to me that a church has stayed in the same place for 70 years, let alone in an urban location,” says André Gonçalves, senior pastor. “Most churches would sell and move to the suburbs where it’s more comfortable and economically viable.” And, as property values skyrocket in this highly gentrified area, this is a real option for DFC, but one they won’t consider. “We don’t want to leave,” Gonçalves says, “because we would lose the immense ministry opportunity we have here.”

DFC has long used its central location in downtown to God’s advantage. Though their primary ministry has always been Dallas Christian Academy, the church has regularly fundraised for projects which serve their local community, and in recent years has established standing ministries that now maintain specific budget lines, including God’s Closet, God’s Table, a homeless ministry and a budding community basketball night.

“We are in an incredible location, and I call that providential,” states Gonçalves. “I also think God has given us the right DNA as a church body to be truly open to all kinds of people to come to church. We’re a strong blend of all different worldviews, backgrounds and ethnicities. Anyone who comes into our church will find a place there.”

There are almost two dozen ethnic groups represented at DFC. “If we’re all planning to go to heaven, we have to be able to love and serve one another regardless of any perceived differences,” Leatherwood points out. “We intentionally celebrate the various cultural backgrounds of our church community, and we’re all learning so much about ourselves and each other.”

Since DFC’s inception, the church has helped install nine other churches in the DFW metroplex and has been home to dozens of pastors and their families, many of whom have grown into leadership roles at conference and union offices across the North American Division.

“Throughout our 146-year history, we have tried to be good stewards of what God has given us,” Gonçalves says. “We’re not large, we’re not wealthy and we’re certainly not perfect, but we want to be an inspiration to other churches so they know that if we’re doing something, they can absolutely do it, too. We want to set an example of how to do things well, collaboratively, on a small scale that doesn’t frighten or overwhelm.”

Leatherwood expects DFC to expand their community outreach. “That should be the pulse of the church,” she says. “I want to see us sharing the gospel with more individuals through outreach, prayer and relationships. I can’t imagine us going backward–we must only move forward.”