Eyes Fixed on the Finish Line

Running with Focus and Training Wisely 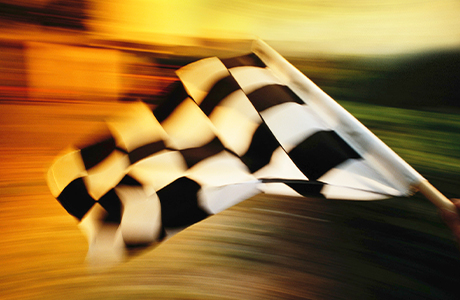 I love car racing. The cars, the different engines and the various tracks, the strategies and the skills of each driver are all part of the exciting package.

Some time ago, I was listening to a driver give an interview about his strategy for winning races. He said, “I just run my race. I don’t worry about what is around me. Lots of people ’mirror drive’ when they get to the lead.” This essentially means they are staring in their rearview mirror so they can block whoever is coming up behind him. “I don’t do that,”
he said.

“You got to the lead for a reason.” The driver continued, “I look ahead, hit my marks, and go as fast as I possibly can without distraction, and I keep my focus until the end.” I believe this driver was taking his quote from Philippians 3:13-14, where Paul says: “But one thing I do, forgetting what is behind and straining toward what is ahead, I press on toward the goal to win the prize for which God has called me heavenward in Christ Jesus.”

The apostle Paul likens the Christian life to running a race. This imagery likely came from Paul’s acquaintance with the Isthmian Games, which were held seven miles east of Corinth in a place called Isthmia. Every few years, Olympic-type games were held there in honor of Greek gods. The Corinthians were very familiar with these games. Using imagery which would be very familiar to his readers, Paul made several points in this metaphor which are analogous to the Christian life.

In 1 Corinthians 9:24-26, Paul says, “Do you not know that in a race all the runners run, but only one gets the prize? Run in such a way as to get the prize. Everyone who competes in the games goes into strict training. They do it to get a crown that will not last, but we do it to get a crown that will last forever. Therefore I do not run like someone running aimlessly; I do not fight like a boxer beating the air.”

As a husband, father and pastor, I know that danger. I keep a little wooden figurine on my desk as a reminder of an article that author Gordon MacDonald wrote several years ago, called “Seven Siphons That Suck the Joy Out of Leadership.” One of those things is Words Without Actions. We can talk about something so much that we deceive ourselves into thinking that we are actually doing it just because we talk about it. And that’s a real and dangerous trap.

For us to stay focused on God’s race, we need to surrender daily, so He can do the transformation He wants to do in us. We also need to go back to the basics of our walk with Jesus. We need to spend time in prayer, journaling, worship, serving other people, Bible study, memorization, living in the constant awareness of the presence of God in us, saying yes to the promptings of the Holy Spirit as He gives us leadership through the day. That is the type of training we need to finish the race well.

Later on in his life, just about at the end of his race, Paul writes to Timothy and says, “I have fought the good fight, I have finished the race, and I have remained faithful.” 2 Timothy 4:7 (NLT). Physical training is good, but training for godliness is much better, promising benefits in this life and in the life to come. So, stay focused as you run.

If ever there was someone who epitomized the run of a champion, it was Jesus Christ. Talk about training, endurance and focus. Jesus knew that His race was uphill.

He knew that the plan to redeem humanity involved going up a hill to a cross, but He ran there anyway. There were all kinds of distractions for Him not to do that, but He remained focused on His mission.

Jesus was focused. He knew where He was supposed to run. He had His eye on the prize before Him. That prize was us.

In her book The Ministry of Healing, Ellen G. White says, “In the warfare in which we are engaged, all may win who will discipline themselves by obedience to the right principles. The practice of these principles in the details of life is too often looked upon as unimportant—a matter too trivial to demand attention. But in view of the issues at stake, nothing with which we have to do is small. Every act casts its weight into the scale that determines life’s victory or defeat. The scriptures bids us, ‘So run, that ye may obtain.’”

Let us run with growing anticipation of that future moment when we will stand before Christ. In that final day, may He place the imperishable crown upon our heads as we give Him glory, saying, “Thanks be to God who gives us the victory through our Lord Jesus Christ.” 1 Corinthians 15:57 (NAS).

By Elton DeMoraes, D.Min. DeMoraes is the Southwestern Union Vice President for Church Ministries. He lives in Burleson with his wife Alessandra, and their daughter, Isabella.