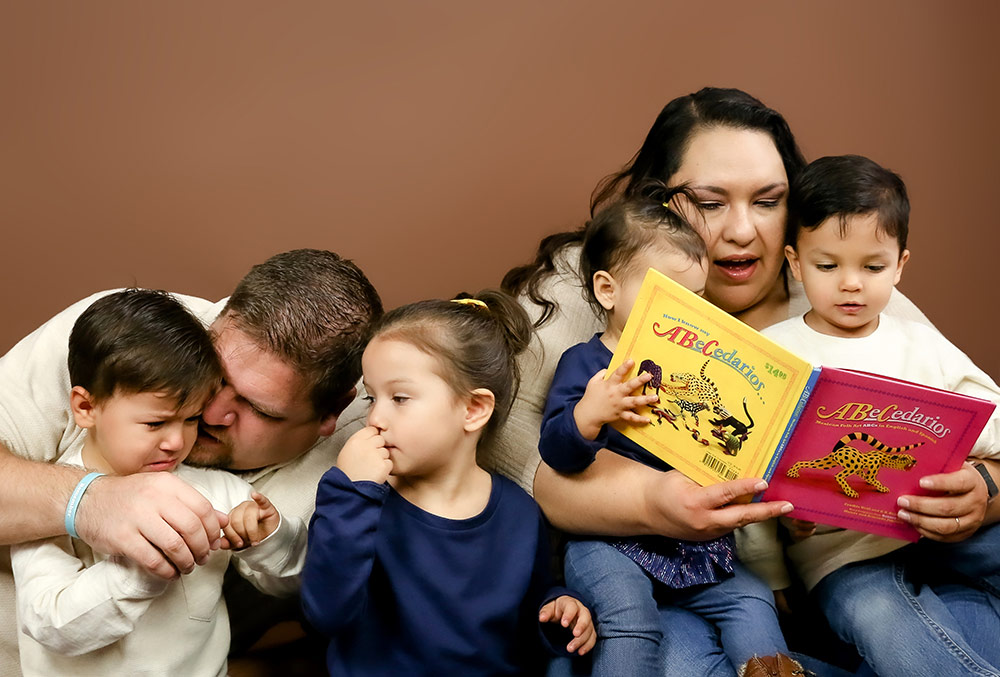 They weren’t expecting an instant family. The journey would have twist and turns and Chris and Aimee Clapp would learn to trust in God, even when things seemed to not make sense. “Why?” Chris asked in the midst of legal proceedings. “Lord, I don’t know what’s going to happen. I don’t understand, but God, please take this.”

Chris and Aime were married December 2007 and began their life together in El Paso, Texas. Chris definitely wanted to be a father one day. But, despite her love of children, Aimee was uncertain about motherhood. At times she felt they may be financially and emotionally unprepared.

As time passed Aimee processed thoughts about motherhood and children. More than ever before, she longed to hold a child in her arms. “I felt like I had this love to give and no child to give it to,” said Aimee. Although she didn’t understand why this was happening to her, Aimee trusted that God had a plan.

A friend invited Aimee and Chris to an informational meeting about adoption through foster care. Hesitantly, they considered foster care as a viable option. They discussed it and eventually signed up for training. Before they had even completed the paperwork for foster parent certification Child Protective Services called.

“If you turn in your paperwork today, we can get you certified today,” The agent said, “And we would like to place four kids with you, today.”

Stunned, Aimee and Chris reacted with their first thought, “We need to pray about this.” They never expected to have a child placed so quickly, let alone an entire sibling group. It was a huge jump, and they didn’t feel quite ready to take in four children, one being a newborn.

“We decided to just start with one,” Chris said. The oldest child in the group was a half-sibling of the younger three and she was placed in one foster home, another home agreed to take two-year old Karlie and Ezequiel. The Clapps brought home one-year old Max.

Max arrived with only the clothes on his back and a change of clothes that the CPS agent had picked up at a convenience store. “That was a scary feeling,” said Aimee. “Knowing that there was a set of siblings out there that needed a home was overwhelming. So we started out with one of the siblings. It’s a fear like no other. It’s a fear of doing right by the child. It’s a fear of not being able to handle it. It’s a fear of wondering how the child is going to react to you. It was very scary bringing a little one into our home.”

Along with the shock of being new parents, Aimee and Chris had to learn to be the parents of a recently neglected child. Max and his siblings were not healthy, and he had been in the ER the night he came to their home. The fear and pressure was incredible. Through the challenges, the Clapps opened their hearts, and accepted Max as their own son.

Doing so put the Clapps in an emotionally vulnerable situation. The ultimate goal in foster care is reunification with biological family. There was no guarantee that Max would stay with them. If either biological parent showed an improvement, Max could go back to his parents.

“It was a very trying and difficult situation,” Chris said. “I’ve worked with kids, but that’s very different from being a parent, especially a foster parent. It’s unlike anything I’ve ever done, and it’s been a growing experience.”

About a month into fostering, the first family visitation took place. Aimee and Chris met the other siblings, foster parents and the children’s biological mother for the first time. Karlie was only a year older than Max, but hardly knew her brother. When referring to him, she never called him “my brother” or even Max. She called him “that boy,” and it broke their hearts.  Ezequiel was just an infant. Soon afterwards, the Clapps also brought Ezequiel and Karlie into the family.

Aimee and Chris wanted to adopt the children, but it wasn’t simple. Legal battles and hearings were long and drawn out. During that time, the Clapps lived with the reality that the children could be taken away at any moment. Every day they faced new uncertainties.

When it looked like the kids would be officially adopted, an appeal was filed. “For me, the uncertainty created a kind of weariness that physically hurt,” said Aimee. “I felt the weight literally on my chest. By this point I am madly in love with my kids. Knowing that I could possibly lose them was physically and emotionally painful.” The hearings continued. It seemed like the journey would never end. Then, the biological mother had a turning point.

She bluntly asked Aimee, “So you plan on keeping the kids?” Aimee responded, “If they are available and if you are ok with it, yes. We love your kids. They are your kids, but we love them.” The mother nodded, and said, “Ok.”

Thirteen months after the Clapps began fostering the kids, their biological mother gave birth to another baby and the two-day old little girl was placed with Aimee and Chris. The mother would eventually relinquish her rights directly to the Clapps because she didn’t want her baby girl to go anywhere else.

Karlie, Max and Ezequiel were adopted on August 6, 2019.  “It was like a weight lifted off my chest,” said Aimee. “We told the kids, ‘They are your parents, but God chose us to be your parents now and God chose you to be our kids.’ The three kids celebrated the good news with their new parents and youngest sister, whose adoption is still in process. Their oldest half-sister now lives with her paternal grandparents.

Aimee and Chris learned to trust in God like never before. While navigating parenthood and legal cases, they faced unrelated hardships. Chris was unemployed for a while, family members experienced serious health issues and Aimee lost her mother. Through it all, they thank God for the blessing of family and holding them through the dark times.

“It’s been insanity,” said Chris. “We’ve had hardships, but at the same time, we can choose what to focus on. We can focus on the difficult things or we can focus on the fantastic things, and I am just so thankful that we have the kids.”

Though the final adoption is not yet complete, Aimee and Chris feel positive that they will gain parental rights of the youngest little girl. The Clapps never imagined they would go from zero to four kids so quickly, but God had a plan for their family. They continue to praise Him for leading them through uncertainties, and for handpicking them to parent the beautiful children that now make up the family God has designed for them.

By Makala James. James lives with her husband, Denny, in Granbury, Texas.