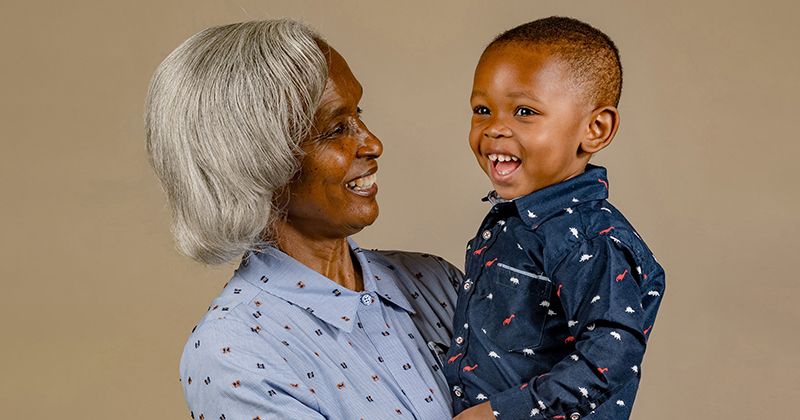 Her grandmother was special. Dorothy Johnson remembers her grandmother cooking, singing hymns and saying the Lord’s Prayer. “Talk to the Lord, she would tell me, and, growing up I always did,” says Dorothy. Her grandmother lived with Johnson’s family as she grew up in Fort Worth, Texas. The rest of her family, her parents and siblings, were not religious, nor were they invested in each others’ lives. “I know my family did the best they could, but I did whatever I wanted and nobody really had anything to say about it. I didn’t have any direction and nobody really cared. I could have done anything with my life but nobody cared enough.”

Dorothy met Rogers Johnson, who was an Adventist and a member of the Air Force, when he was visiting relatives in her neighborhood. The two married, and she studied the Bible and was baptized. They moved to California and traveled as the military required for four years before settling once again in Fort Worth. Her husband worked as an engineer at Lockheed-Martin, and they soon welcomed two daughters, Reytheda and Dorenda. Dorothy and her husband were determined to raise their girls to know Jesus.

Looking back, Dorothy says she had one goal for herself, her daughters and her family. “Keep God first, last and always. That’s all I know and my main objective.”

“My husband and I talked and prayed about what we wanted, and we decided early on that we were going to have our children in Christian schools and that I was going to be a stay at home mom so that I could always be there for the girls. It was important for me because of the way I had been raised. I wished I’d had someone in my life who had been there for me that way.”

For the Johnson family to commit to that lifestyle, it meant sticking to a plan, having a strict budget and sometimes sacrificing the “wants” that came along.

“We were a one-income household. We had to stick to our budget and be committed. The Lord always provided for what we needed and we never went without, but sometimes the ’wants’ had to come later in order to live the way we had decided on.”

When their daughters were school-aged, the Johnsons prayed about where they should be educated and chose to send them to Burton Adventist Academy in Arlington, Texas. Dorothy volunteered at the school, staying very active in the home and school programs. She was so active and involved that eventually she was offered a part-time job at the school as a teacher’s aide, a position she kept for more than 20 years. Though she has now retired, she continues to volunteer with various projects at the school.

“I wanted my girls to be brought up to know the Lord, to know about the Bible and to have people around them that cared for them,” she says. Dorothy felt that being part of the school’s community gave her daughters role models and the opportunity to learn from their peers in a nurturing environment.

“They had a lot of role models. They saw people make both good and bad decisions, and they were able to learn from that and we were able to talk about those decisions.” As parents, Dorothy says she and her husband wanted their children to feel safe talking to them, and to be able to encourage them and to support them.

“We told them, ’We’re your parents, we want you to be able to make the right choices,’ so they would understand that we wanted them to talk to us and we would help them. And they did—they loved to go to their daddy with their problems.”

The Johnsons were also active in their church. Dorothy liked to stay behind the scenes, helping with background details, while Rogers was active in prison ministries and Pathfinders. Rogers is currently the prison ministries coordinator and Pathfinder director for the Southwest Region Conference. Dorothy, along with a group of women from her church, Forest Hill Seventh-day Adventist Church, has volunteered at the Union Gospel Mission of Tarrant County for more than 20 years, serving meals to the homeless. “We serve the meals, and we also do what we can to make the people we meet feel special,” she says.

Dorothy’s daughters both went on to graduate from college and have had successful careers. Both are married, and Dorothy now has a young grandson, Benjamin. She loves her family and is happy with the fact that her daughters stay in close contact.

“They are loving and kind. Because of my family background, I thought maybe when they got older they wouldn’t want to stop by or talk to us much but they do. They always keep in contact.”

Dorothy loves spending time with her grandson and wants what is best for him. She prays for him to know and love Jesus. It’s her daily prayer that little Benjamin will make his main objective to “keep God first, last and always.”

By Jessica Lozano. Lozano is the Southwestern Union Communication Director and Record Editor. She lives in Cleburne, Texas.