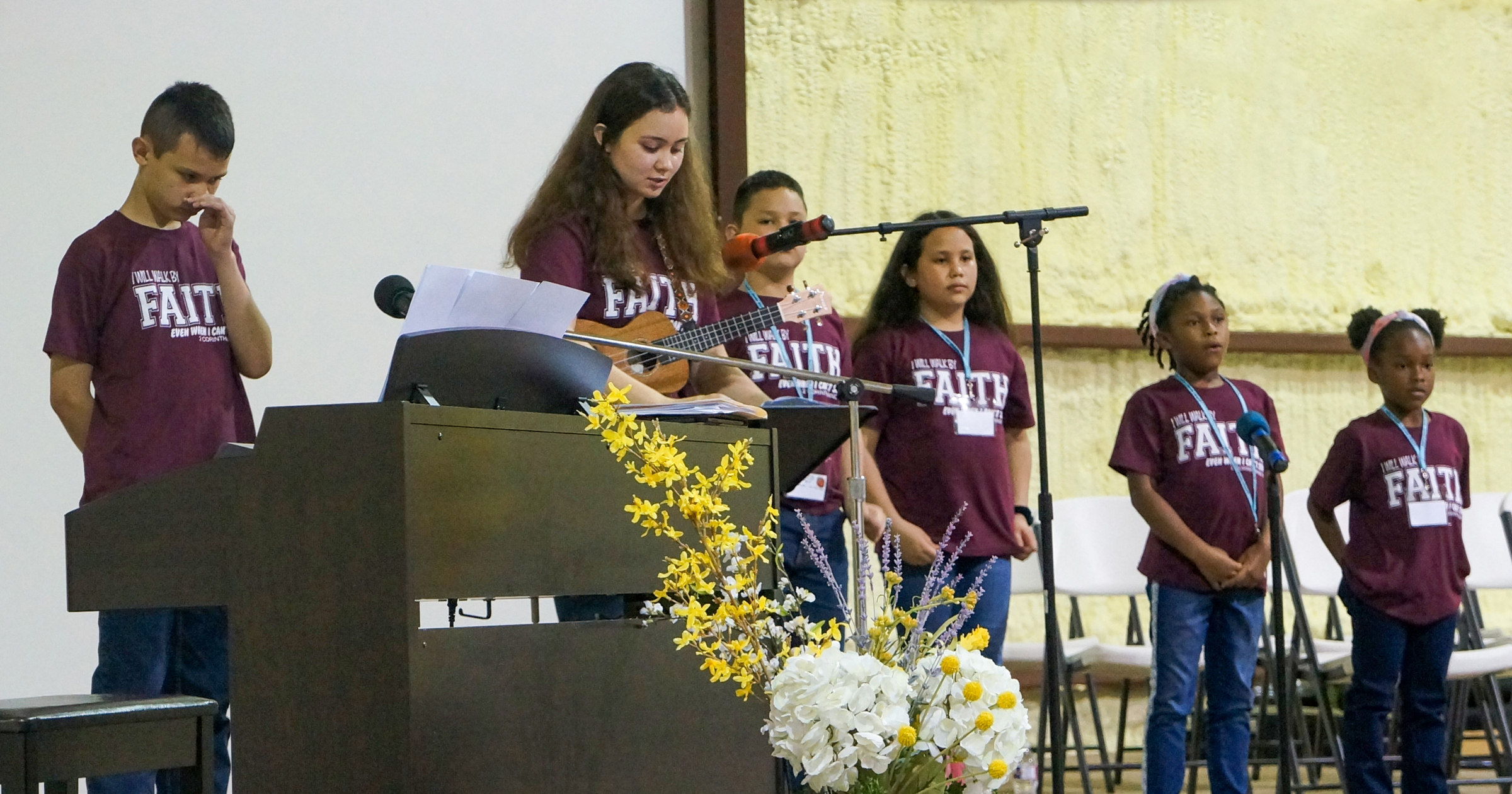 HAMMOND, LA. – Missing out on camp meeting last year because of the COVID-19 guidelines, we have continued to meet “virtually” as much as possible, but many have missed the in-person interaction. Once the governor lifted the restrictions on religious group meetings and we knew we could have 100 percent capacity in attendance, the Conference officers decided to move forward. Our South Louisiana Camp Meeting in mid-April was about to happen. It was a wonderful blessing to be together again at the Conference Convention Center in Hammond, La.

Although it poured down rain for several days leading up to and during the event, complicating preparations and leaving things very soggy, we had an incredible turnout. We even had a brave couple that set up their tent and camped on the grounds. There were nearly 300 guests counted in all and especially enthusiastic were the young people.

The young peoples’ tents were surrounded by a moat, due to the rains. However, wooden pallets left behind from recent supplies for our disaster relief team in that area were recycled to make a footbridge from the graveled lot through the “swamps.”

David Craig, Arkansas-Louisiana Conference youth director, had a tent full of youth/young adults who were excited to be involved. Joyce Fortner, Arkansas-Louisiana Conference children’s ministries coordinator, led out in the Primary and Junior tent, under the theme “Where is Grace?” Retired pastor Don Fortner showed up dressed as Jesus to help answer that question. The Kindergarten tent showcased “Under the Sea” with the guidance of Regina Wilson and volunteers of Baton Rouge. Later, as the little ones looked up to see seahorses and stingrays and other fishy things in the “waters” overhead, they decorated their very own boats in which they sat and listened to lessons and even did exercises.

The overall theme of camp meeting was “Go, Grow and Multiply.” Southwestern Union Vice President (now Texas Conference President) Elton DeMoraes (pictured above, right) was the guest speaker, and the Holy Spirit empowered him with a timely call to action as we individually and corporately responded to the Lord’s commission and call to our hearts!

We were blessed by the actions of the Baton Rouge Pathfinders who, under Debbie Decker’s direction, organized sack lunches for Sabbath afternoon at a time when regulations kept us from making use of full-fledged cooking and serving facilities. It was a simple meal, but everyone was fed.

After lunch, DeMoraes again participated in the ordination of one of our young pastors, Michael Cerda, currently with Zachary and Baton Rouge Seventh-day Adventist churches. Throughout the meetings we were blessed by the musical talents of many members, in particular Liz Mendoza, who provided special music. We had a couple of special numbers from Richard Dye, and Marjorie Belizaire graciously played the piano for the group singing. We finished the afternoon with a concert, “A Louisiana Homecoming,” pulling together the talent of many from the various churches. Notable were the children from New Iberia, who never fail to provide a couple of songs for our Louisiana camp meeting. E.J. Collins, pastor, was able to join us toward the end and give us a few songs on the piano.

We were introduced to two of our new pastors, Jerson Sical and Hillis Jeffries III, who have recently joined the team in Louisiana. Jonathan Escobar, who was unable to attend, is new to Hammond. We want to express our gratitude to all who helped make this camp meeting a success, especially those who worked behind the scenes. It was a joyous occasion. We know we will all be able to come together as a great big family upon Jesus’ return, but we are happy we were able to meet once again in South Louisiana.