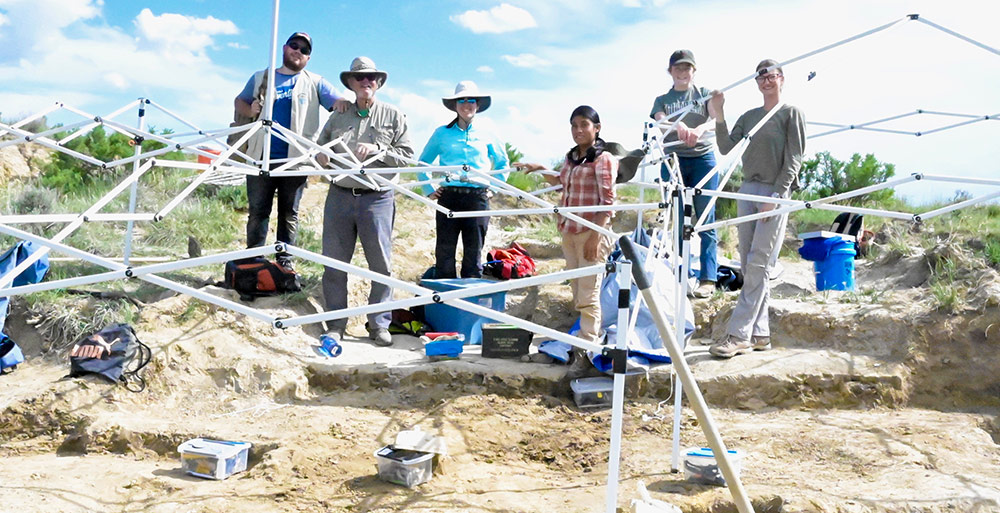 CONWAY, ARK. – I became interested in Southwestern Adventist University’s Dino Dig after viewing a brochure and decided to go this past summer. After driving 1,200 miles, the last leg of the journey was driving 12 miles on a gravel road, being careful that I did not hit a cow or calf in the road. At the camp, there was one large building housing men and women’s restrooms with showers; a kitchen and eating room; and a storage area. There was also a large canvas tent where worship was held.

During the week, breakfast was served at 7 a.m. followed by worship. The newbies were shown what to do on a video and we were assigned to a group. I was assigned to dig in the Nuefeld (New Field) quarry. McKenzie, a student from Southern Adventist University (SAU), was the quarry leader. The rest of our group consisted of SAU students Clare, Daniel and Eden (Daniel and Eden are South Koreans); Otto, from Argentina, a science professor; Maria from Peru, who runs a museum there; Marcela from Mexico, a high school teacher; and Miko from Canada, who was working on a documentary about creation and evolution. My new friends took care of me and called me “Grandfather.”

At the quarry I learned to use a paint scraper and to take off one layer of dirt at a time. If I heard a clink, I used a small pick and a brush to find out what I had found. Many times it was a rock; other times it was a bone fragment or part of a larger bone. I found many bone fragments, several vertebra, a partial jaw bone, three large femurs over three feet long and a pubis that was over two feet long. Each large bone’s location was recorded using GPS, recorded in a book and then either wrapped in aluminum foil or placed in burlap and plaster cast to be sent back to the university’s Dinosaur Science Museum.