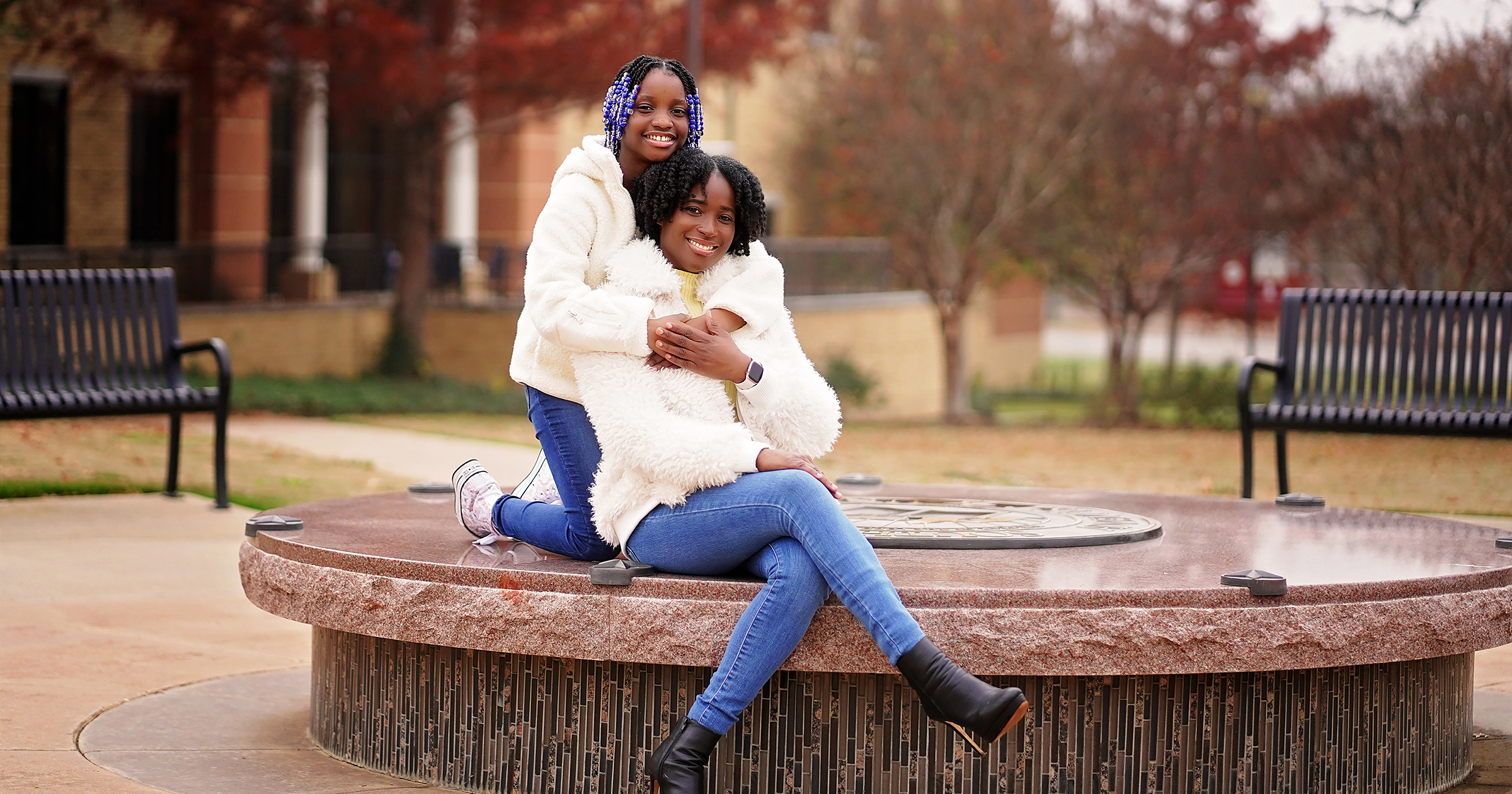 Attending university in America was always my dream growing up. I remember studying for the SAT with my siblings in Jamaica and falling in love with words. However, my SAT score was not enough to grant me a placement in college. My passion and dreams were put on hold. I finished high school and went straight to work.

I was born and raised a Seventh-day Adventist, but I strayed from the Church when I entered the workforce. This period coincided with a marriage to my ex-husband and the birth of my daughter, Mia. In 2014, I moved to New York, and in 2015 the marriage ended. Shortly thereafter, Mia went back to Jamaica to live with her grandmother.

By 2019, my spiritual life had declined sharply. I had enlisted in the military and was stationed in Fort Hood near Killeen, Texas. I was working as a logistics specialist, attending to government supplies. Mia had moved back with me, and I observed that she was always reading her Bible.

I was a new soldier alone in a new state. I was finally away from non-Christian friends and the bright lights, glitz, and glamor of New York. Here, I finally heard God calling me back to a relationship with Him. After several Bible studies together, Mia and I got baptized together on August 22, 2020.

I had begun online college classes and after serving three years, my military contract was about to end. I didn’t know what to do. I contemplated whether I should leave or stay.

I was deployed in the Middle East and one of the first obstacles I faced was working on Sabbath. After a series of prayers I approached my commanding officer on the matter. I told him that I could work every Sunday, even Saturday nights, but I could not work on the Sabbath. He replied: “I’m pretty Jesus friendly,” and he gave me Sabbaths off.

While on deployment, I received news that my sister had passed away in New York. I went back for the funeral and one day, while I was walking with Mia and her friend, I heard a voice saying to me as plain as day: “You know, you could become a teacher.” At the time I didn’t know where that voice came from or what I would teach. Even though I’m from a family of teachers, I had never thought about being an educator. But the thought only persisted.

After the funeral, I went back to the Middle East. Matthew 28:19, which says, “Go ye therefore and teach all nations” regularly resounded in my mind. I started contemplating whether God wanted me to teach Bible classes or something else, but I still wasn’t sure. That Scripture kept repeating itself in my mind for a whole week while my supervisors kept asking if I was planning to re-enlist. I simply replied: “I am waiting on the Lord.”

I was in contact with a military career counselor who would help me weigh my options on how to proceed for re-enlistment. He sent me a message on December 29, 2021, with some figures for re-enlistment bonuses. I was offered $2,800 for three years and $9,000 for six years. This really got me thinking, “Should I really re-enlist?” I mean, if I did, I could pay off some things that needed paying off.

Even though I had told my supervisors and battle buddies that I was waiting on God to make my decision, I started to think about the re-enlistment bonuses. I texted my sergeant and asked if I could get the money all at once, and he said yes. This got me really thinking even harder than before.

During this time, I was about to start my classes at Liberty University where I had planned to go into the chaplaincy program. But on January 5, 2022, I tested positive for COVID-19. After just barely recuperating, I had to go straight back to work with lingering symptoms. I happened to miss the bus one morning and my leaders were upset. As a result, they stopped me from re-enlisting and prevented me from starting my program at Liberty University.

I couldn’t understand why all of this was happening. I remember crying out to God and calling friends requesting prayers. Pauline Mullings, a friend of mine in England, and the Oakwood University Church prayer warriors were my constant support. I called them almost every day requesting prayers.

A few weeks later, a highly stressful period at work arose. We had to give an account of all the government property we had, and then I started having some high fevers that the doctors on base couldn’t diagnose.

I was transported to the hospital and, while hospitalized, a roommate came to stay for the night. As we chatted, she mentioned that the flag on my profile had been removed, “You can now re-enlist,” she shared.

“God doesn’t want me to re-enlist,” I replied. I was thinking that I had already accomplished all that I was called to do in the military and I knew that my daughter needed me. A week later, I was discharged from the hospital, and within several more weeks, I was medically released and sent back to Fort Hood in March. My deployment should have lasted a year, but God sent me home early.

The things that I went through on deployment showed me that when you stand up for God, He will stand up for you. I thought about how God had provided a solution for my Sabbath challenge. I remembered how I sang to stay connected to God while in the Middle East. How I had spent a lot of time in nature and could feel God was using me in various ways.

So, in March, I continued to press forward with the decision I felt God led me to make which was not to re-enlist, but rather to pursue school.

However, I still didn’t know how or where I would get accepted, or what I was supposed to study. All I knew was that God was taking me into something new.

I left the military on the morning of July 15, 2022, still unsure of what was next. Liberty University was still calling me and I had applied to Oakwood University and Baylor University. I got a job on the military base in the warehouse, but during my second week a member from my church, Carmen Rhodes, called me and said, “Do you know about Southwestern Adventist University (SWAU)? It’s here in Texas.”

I had no idea. That day I met with a friend who told me her children had attended SWAU and I resolved to check out the school, but procrastinated.

God woke me up early one morning and said, “You have to apply today,” so I said, “Okay, Lord.” I went on the computer, and started to apply. I was getting nervous because I needed to get ready for work, but a message popped on the screen saying I was almost done.

I hit submit and checked my email a bit later to find there was a message in my inbox from Rahneeka Hazelton, vice president for enrollment. Her email said, “If you send me your transcript, I could get you in to start classes.” I was so excited. I sent my transcript and called the school all week to follow up. Ms. Hazelton said she would work late one day to process my application. When she messaged me and said “accepted,” I burst out crying. When Mia asked why I was crying, I told her that all my life I had wanted to go to university in person, and now God was blessing me with this opportunity.

I was so excited that I couldn’t even sleep. I handed in a resignation letter that day. Then, I discovered that I would be getting some compensation from the military. This would help to take care of my bills so that I wouldn’t need to work. God is amazing!

My academic adviser, Dr. The, called me on the Friday before classes started to discuss my school plans. I was planning to travel from Killeen to Keene every day, but Dr. The said, “You can’t travel; it’s two hours away.”

She connected me with the Keene Adventist Elementary School principal and we visited the school with a few of my supportive church members. Dr. The also introduced me to her husband who oversees the family housing at SWAU. Although I had to drive to school two hours one way the first week, I received the keys to my apartment the next Friday. On Sunday, my church family, friends and soldiers helped Mia and me move to Keene.

A few weeks ago, I sat in one of my religion classes, Life and Teachings of Jesus, when my professor put up a slide that said: “When God is sending you somewhere, He will make provision for you.” God has done this for me.

God told me that He was going to do a new thing in my life and I am rejoicing. I’m finally attending university in America. Not only that, but my tuition is paid in full because of my military service.

One day, I hope to share God's goodness through teaching others. I am blessed and I thank God for making my dreams come true!

By Marsha Miller. Miller is studying English and Theology. She is a member of the Keene Seventh-day Adventist Church.