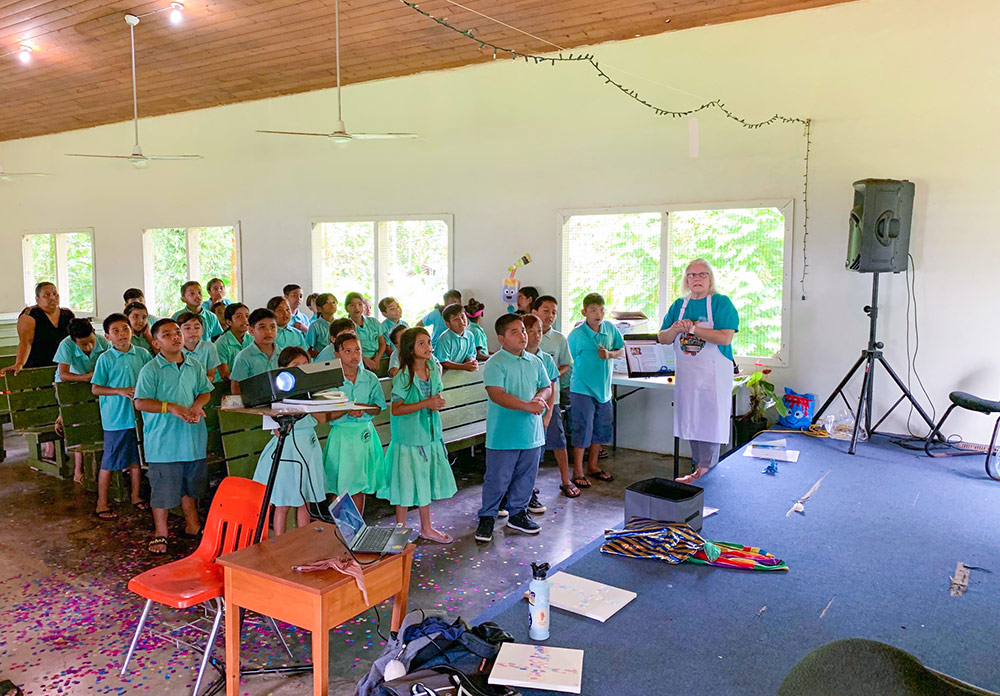 BURLESON, TEX. – Dallas to Honolulu, Honolulu to Majuro, Majuro to Pohnpei—it should have taken three flights for a team of four from the Southwestern Union to arrive in Pohnpei. Before the island hopper arrived in Pohnpei, a storm forced them to pass over Pohnpei and land on the island of Chuuk and then head to Guam before the team was able to arrive at their final destination of Kolonia, Pohnpei, where they would be speaking for Week of Prayer sessions. Arriving at 3 a.m. on Tuesday, Sept. 10, the team was greeted joyfully by the pastor of the four Seventh-day Adventist churches on Pohnpei, Walter Johns; and the principal of the Pohnpei Seventh-day Adventist School, Franky Edward.

After just a few hours of sleep, the team was on the move again. The Week of Prayer began with Moody providing a worship session at the school for the 7th-12th grade students, while Canó and Clifford provided a worship session geared toward Kindergarten through sixth graders.

In the evening, Moody held an inspirational series at the Kolonia Seventh-day Adventist Church sharing messages of hope with both the church members and the broader community. While Moody spoke in English, the well-attended meetings were translated into Pohnpeian by a local translator. The busy Week of Prayer continued through the week and culminated with Sabbath worship.

In addition to reaching out to the community, school children and church members, the team was able to minister to the student missionaries who have left their Adventist colleges for a year to teach at the Pohnpei school.

The trip was packed with opportunities to witness, as well as to learn about the people of Pohnpei. The team learned that the greatest needs in the mission field are people and supplies: missionaries, Bible workers, school supplies and supplies for missionaries.

Join the Southwestern Union in supporting the work in Pohnpei. Visit SouthwesternAdventist.org/Pohnpei.