My Call to Serve

In Pursuit of Purpose 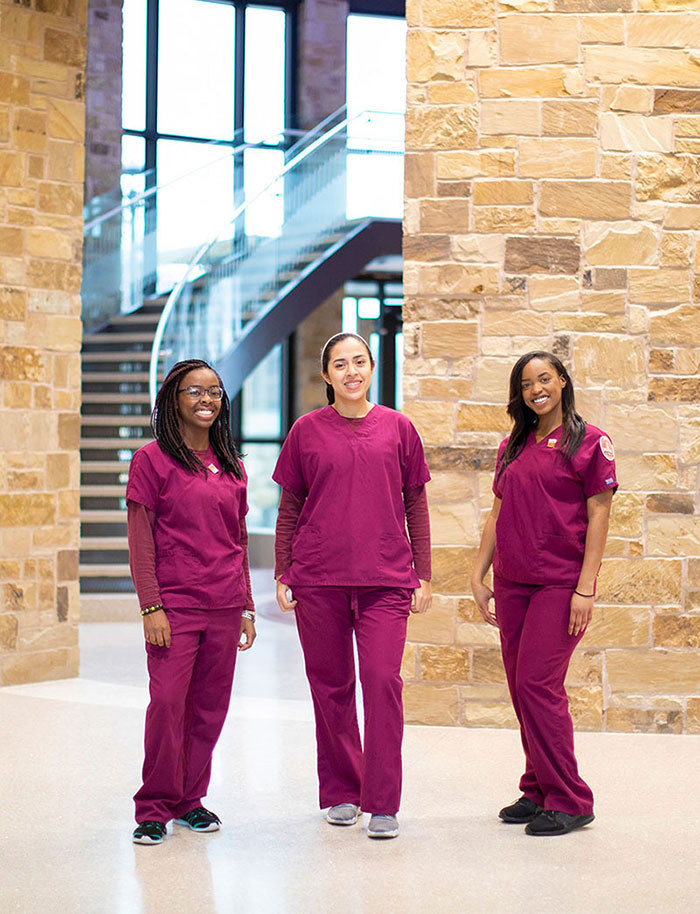 God leads each of us through a unique journey. Along this journey, we discover things about ourselves, what our passions are and what moves us. We discover things about others, how interpersonal relationships affect us and how we relate to others. We also find ourselves constantly discovering things about God and His calling on our lives. We learn that, regardless of the intensity of the issues, whether they are small or life-changing, He is there every step of the way, guiding, providing and blessing.

Randelle Ntakirutimana, Ariana Cerino Cordova and Christina Evans are three remarkable young women who have discovered God’s call for them to serve others through nursing. All three will graduate from the nursing program at Southwestern Adventist University this year among many other skilled and talented graduates. While their stories are unique and God worked on each heart individually, their stories share resounding echoes of faith, perseverance and reliance on God.

Randelle Ntakirutimana is the youngest of five siblings in a family where many members work in the healthcare industry. She grew up in South Texas and her family attended the only Adventist church in the area, a Spanish church where she found herself learning the language.

Envisioning a career focused on the business side of healthcare, she enrolled as a pre-med business major at Southwestern Adventist University after a conversation with an enthusiastic professor, Bill Kilgore, D.Min., who she met at the General Conference Session in San Antonio in 2015.

Ntakirutimana worked at a medical diagnostic center in the Dallas-Fort Worth  area while she was in school. A year later, after realizing she was more interested in direct patient care, she began researching the nursing program at SWAU. She would need to take three challenging classes the next semester in order to be considered for the program. Knowing it would be difficult, she prayed and decided that this was the path God was calling her towards. She did really well in those three classes and was even asked to be a teacher’s assistant in each!

“The way everything turned out has really been a blessing. My nursing journey has been fantastic!” she says. “The interpersonal relationships with the professors is great! They check in with the students when they miss class or don’t do well on exams. It’s a humbling experience to have that connection with the professors and to be able to learn to care for others from them.”

“Nursing requires compassion and resilience,” Ntakirutimana says. “It’s not easy and there are challenges. The program can be tough with exams every week. But going to clinicals and being able to see people and care for patients makes it all worth it. ” She feels God called her to nursing and gave her a passion for people. “I get to do something bigger than myself. I get to care for people during their most vulnerable times. I learn from patients and get to hear their stories. Their families put their trust in me.”

After graduation in May, Ntakirutimana plans to spend some time in the medical mission field in South or Central America. Afterwards, she’ll wait to see where God calls her next.

Ariana Cerino Cordova came to the United States four years ago to live near her brothers, Beto and Eduardo, in Houston. She grew up in a small town near the Southern Gulf Coast of Mexico and, although anxious about such a big move, her brothers assured her she would be able to study and make a life for herself here.

She began attending the Adventist church that her brother, Beto attended with his wife, Rosanny, and their children. She soon began to participate in mission trips and traveled to the Dominican Republic and Panama. “Sometimes we think we are going to help others,” Cerino Cordova says, “But God ends up blessing us. I feel it is my calling to help others.” In time, she fell in love with God and wanted to learn more about Him.

One day, as she watched her nieces while Beto and Rosanny were at work, something frightening happened. One of the girls began to cough and have trouble breathing. A rash quickly developed on her skin and Cerino Cordova called Rosanny as she frantically got ready to take the girls to the emergency room. Her sister-in-law responded calmly and asked if there had been any fish in the house. Cerino Cordova had eaten  fish for lunch in her take out that day. Rosanny told her what medicine to give the niece and told them she would check back with them a little later. The niece was instantly better and Cerino Cordova learned the importance of caring for others. Rosanny, a SWAU alumna, was a nurse and knew how to solve the problem and react well under pressure.

Cerino Cordova set off for Southwestern with the help and support of her family. Nursing was challenging and a little harder than she had anticipated, but she would pray and ask God to affirm she was on the right path. “I believe God chose nursing for me. Every time you have the opportunity to make an impact in someone's life it makes all the hard work worth it. You can show them God through you. You have the chance, as a nurse, to bring someone a little bit of happiness every day.”

Cerino Cordova met a special patient during an internship in a small county hospital in Georgia. She had been shadowing the obstetrics director when a call came for someone to translate for a patient in labor. The patient only spoke Spanish and was terrified. She was in a lot of pain and didn’t understand why she couldn’t receive any medication. “I explained to her the process and reassured her she would get pain medicine at the appropriate time. Her anxiety decreased and I realized how my other skills and talents could also be used in nursing.”

Cerino Cordova is looking for an obstetrics nurse residency program in Houston after graduation. She plans to keep helping others and discovering her call.

Christina Evans was born and raised in the Dallas-Fort Worth area and spent most of her summers with her family in Jamaica. Evans always wanted to work in the medical field. She set her sights on medical school and applied to Florida Hospital College (FHC) in Orlando.

When she shared her plans with Danny Cano, her high school teacher and mentor at Dallas Christian Academy, he asked her a series of questions that caused her to pause. She realized she didn’t have a clear motivator for being a doctor. “You have a kind and compassionate heart,” he told her. “Have you ever considered nursing?”

Her preconceived notions about nursing and their perceived position on the totem pole of the medical industry showed Evans that she didn’t have the full picture. Cano gave her a project she calls, “a nursing research goose chase” and set her off to discover how broad the scope of the nursing field is and the importance of this career. “He helped open my eyes to see everything you could do as a nurse career-wise. His wife was a nurse and they had both gone to SWAU and she had loved the program,” Evans says.

Evans wanted to go away for college. SWAU did not seem very appealing at just 40 minutes from home. She shared her consternation with her mom who proposed praying to God and asking for a sign. They put the names of every Seventh-day Adventist university in a bowl and decided whichever school got picked the most, that is where Evans would attend. The first school that was drawn was FHC. The second school was SWAU. They kept going, only to find that the third, fourth and fifth draws were all SWAU. “So God obviously wants me at this school for a reason,” she thought. “I need to stop fighting this. I don’t know why, but He has a reason. I learned that you might not always get want you want, but in time God will give you the desires of your heart. I didn’t go to Florida when I was 18, but I did get to go when I was 21. I had a 12-week internship at Adventist Health Systems and got exposed to all areas of nursing working under the Chief Nursing Officer.”

During one of her clinicals, Evans was assigned to a Neonatal Intensive Care Unit (NICU) at a hospital. She had never been interested in labor and delivery and was apprehensive about working with babies. She was assigned to a newborn who was crying and had a high heart rate. “They asked if I wanted to pick him up, but I was scared because he was so tiny. But I did and I just talked to him. He stopped crying and just looked at me. I kept talking to him and stayed with him all day. He was still when they inserted an IV and I got to feed, burp and put him to sleep. As I was leaving that day one of the NICU nurses told me he was going to miss me. ‘He cries all the time,’ she said. ‘His mom doesn’t come to visit him.’ I still think about that baby boy and pray for him regularly. That is the field I want to go into now. Maybe God sent me that baby to nudge me into this career field.”

Evans was rebaptised last year and credits the school for having such an important impact in her life. “It might be hard at times, but I wouldn’t change it for the world. Kerrie Kimbrow, D.NP., M.S., the nursing department chair, has been an amazing mentor through nursing school. She pushes and encourages the students, especially in difficult classes,” she says. “College is what you make it. I’ve had opportunities here that I wouldn’t have had otherwise. This was the place for me.”

“If you feel a calling in your heart, you need to listen to it and hone in on it.” Evans shares. “God puts things on our hearts for a reason, we need to ask Him why it is on your heart and mind and pray about it. God has your life in His hands, so trust that He will lead you in the right direction.

By Kristina Pascual. Pascual is the Associate Communication Director of the Southwestern Union and managing editor of the Record.