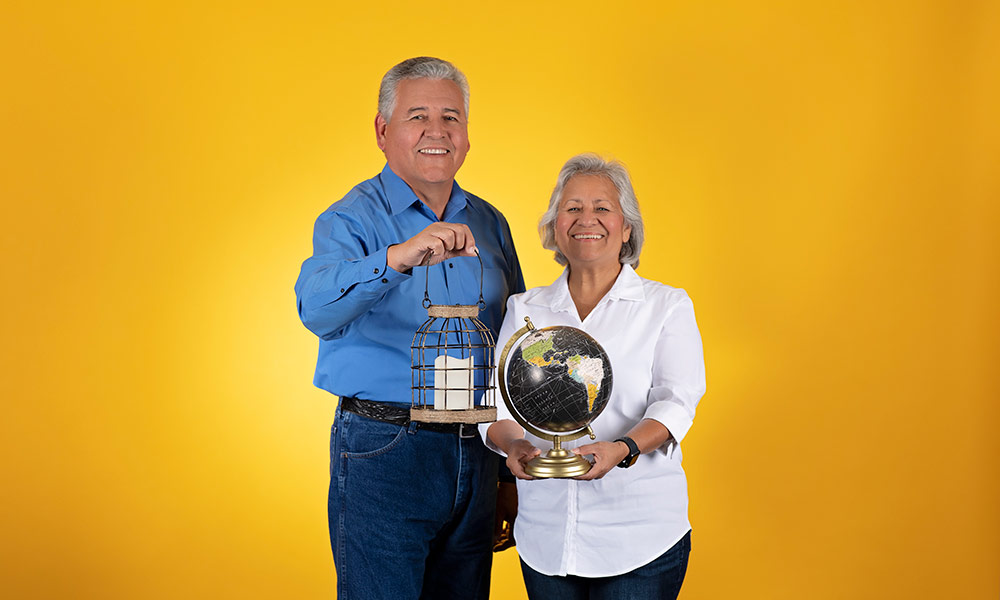 “Nothing like trial by fire to learn the ropes,” Marshall remarks, remembering those first few weeks following the incredible disaster that hit the gulf coast. The Gonzales also serve as the Southwestern Union ACS directors, assisting ACS efforts in the Arkansas-Louisiana, Oklahoma, Southwest Region and Texico conferences. “As a world-wide Seventh-day Adventist Church organization, the reality is we help wherever needed,” Marshall adds. “When Paradise, California, had the horrendous fire, we were in contact with ACS officials there to find out what they needed.”

During the past two years, the Gonzales have worked with churches and communities helping to bring light to those less fortunate by offering a helping hand. “It is an incredible feeling seeing faces light up when they receive basic items that many of us take for granted,” Julie says.

“I remember one time we received a large donation of mops,” Marshall recalls. “I said, ‘Lord, I don’t know why we received these, but I will trust you.’” A short time later, they assisted a church with an outreach event and Marshall felt impressed to bring along a few mops. He was shocked when they became a highly desired item and even made arrangements to have more mops delivered. This unexpected necessity provided an opportunity for church members to make house calls delivering mops. Those connections led to Bible studies. “It just goes to show God can use anything to further His work,” Marshall says. “We just need to listen to His still, small voice.”

“In between disasters, we focus on training and community outreach,” Marshall shares, “but it is the men, women and children that touch our hearts. Whether it is people seeing a need and filling it or people needing a hand up, it is such a representation of Christ on earth.”

“It was overwhelming to learn that United Methodist Church members in the Hill Country region of Texas donate a truck full of clothing to Texas ACS each year,” Julie shares. “It warms your heart and increases your love for humanity. Those donating don’t even get to see the joy on people’s faces receiving the clothing; they simply heard there was a need and filled it.”

Ingathering is a Seventh-day Adventist Church fundraising tradition typically held around the holidays. In Texas, ingathering is known as Ingathering-ACS and is collected year-round, helping fund ACS projects. Most recently, funds donated enabled the Gonzales to shop for new, inexpensive clothing for children and families in shelters near the Texas border. “It is disheartening that there are so many layers involved in trying to assist,” Marshall reveals. “We are just thankful we can do something.”

The Gonzales underestimate the impact they actually have. You can follow their journey at Facebook.com/TXACS as they hold training and church community outreach events in multiple states. Photos chronicle their work as well as that of volunteers and young people creating hygiene kits and clean-up buckets, in addition to assisting during disasters.

Throughout the past two years, Texas ACS distributed more than 3,500 clean-up buckets, 4,000 hygiene kits and 7,000 clothing packets in Arkansas, North and South Carolina, Florida and Oklahoma, as well as many cities in Texas. That doesn’t even include financial contributions or mop distributions, or other unique items donated that were delivered to those in need. In addition, they helped rebuild 27 houses in Refugio, Texas, where many are still struggling to recover from Hurricane Harvey. “None of it would be possible without the generosity of others,” Julie notes. “Individuals and organizations alike are inspiring with their willingness to give.”

“Disasters are when we really have to have patience,” Marshall shares. “Each state has a protocol involved as to whom does what and when.” The Seventh-day Adventist Church, through Adventist Community Services, is known for its warehouse management in times of disasters. There are multiple training courses offered to manage a warehouse. Many people took the training to help the Gonzales manage the warehouse following Hurricane Harvey. “When you have millions of dollars’ worth of product being donated for those affected by a disaster, it takes organization and a lot of communication to get everything where it needs to go,” Julie says.

The Gonzales have a passion to have an ACS director at every church who is regularly coordinating their church members, including their young people, to connect with their community. “Seeing children help create hygiene kits and clean-up buckets is so rewarding for them and us,” Julie shares. “We regularly have schools bring different classes to visit and volunteer at the ACS Depot in Keene, Texas. It is essential to restock the inventory distributed during church outreach events and disasters.” Other churches organize their own events to create kits and clean-up buckets and the Gonzales pick them up during their travels. “It is about working together,” Marshall says. “Being a light to all of our communities.”

Marshall can become very emotional when he talks about the different situations this ministry has assisted. It shows how much he truly cares and how he wants to be used by God to be salt and light to each person, knowing he may be the only connection to Christ they will have.

One highlight for Marshall was seeing a man baptized in the Houston area following Hurricane Harvey. Little York Spanish Seventh-day Adventist Church members simply helped the man rebuild his house after it was flooded for the second time in two years. Seeing them work, the man wanted to know more about the church and eventually started to attend. “We may not always see the fruits of our labors here on earth,” Marshall concludes, “but if we are following God’s words and treating others as if they were Christ, we will see many in heaven.”

Find out more about how Adventist Community Services is active in your area. For donation of items or funds, or to offer your volunteer services contact your local conference ACS director or visit SouthwesternAdventist.org/Community-Services.

By Tamara Michalenko Terry. Terry is the Associate Communication Director for the Texas Conference of Seventh-day Adventists and lives with her husband, Randy, in Burleson, Texas. They have three sons: Joey, Jonathan and James.