Purpose Beyond Our Own 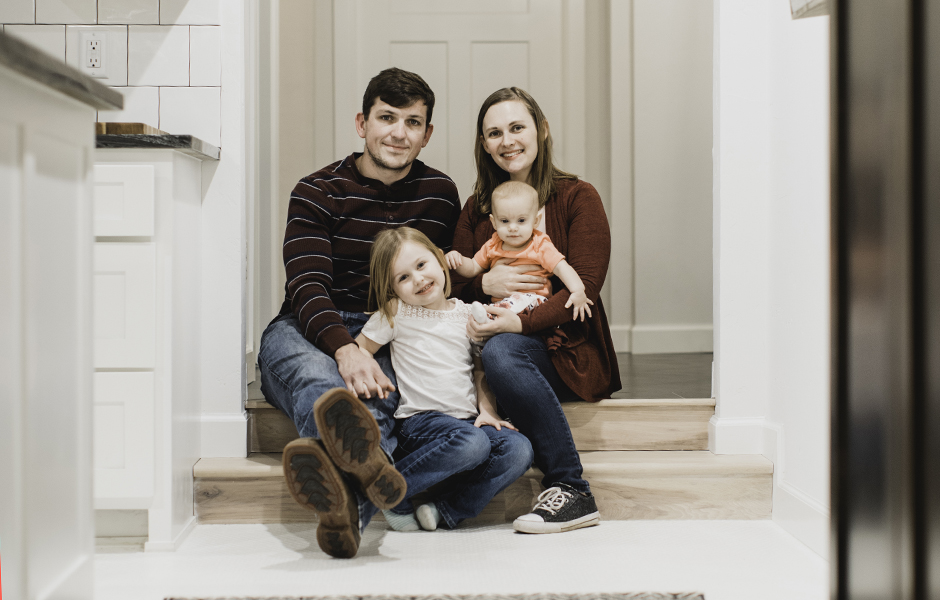 The blue lines indicating positive results on the pregnancy test blurred as she began sobbing uncontrollably. She was 19 years old, unmarried, and estranged from her parents. She felt completely and utterly alone.

Despite the assurance from her boyfriend, Daniel, that everything would be okay, they decided without a second thought that they couldn’t return to church. “It was like Adam and Eve in the Garden of Eden,” Abby says. “We were naked—our sins were laid bare for everyone to see—and we were ashamed, so we hid.” New to the First Seventh-day Adventist Church of Tulsa and new to Adventism, both Abby and Daniel had grown up in very different environments with very different perspectives on church and God.

Daniel’s single-parent, pop-culture-focused home made no mention of God, and his only exposure was the occasional opportunity to hop on a bus from a local church on Sunday morning, get a free hot dog, and attend Sunday School before being bussed back home. Abby’s strict upbringing meant church every Sunday, and intense judgment toward anyone who didn’t live a “good” life.

Daniel had begun attending Tulsa First Church a few months prior, after noticing a billboard advertising a prophecy seminar. He’d attended the seminar, been hooked from the first night, taken Bible studies and had been baptized. When he’d met Abby, Daniel urged her to attend another seminar series the church was hosting. She was hesitant. “My relationship with God was one of animosity on my part and my perceived ambivalence on his,” she explains. “After high school I’d decided I wanted nothing to do with a god who would punish me eternally for a few mistakes, so I’d turned my back on him.”

Finally, Abby agreed to go. Some nights were harder than others, as she began to learn who God really was. She eventually came to understand that he wasn’t, in fact, ambivalent toward her, but precisely the opposite. “After a lifetime of only associating God with negativity, I was discovering that He—and every part of His story—is all about love,” she says. When the seminar ended, Abby was baptized, and Daniel recommitted himself alongside her.

“We felt like we’d just managed to find the truth of God’s love and grace, only to be eliminated from receiving it because of our situation,” Abby explains. Though they decided to honor God by committing to be abstinent until they could marry, both still felt they could not return to church.

Ben Burkhardt, a Bible worker from Oregon serving at the time in Tulsa First Church, had been studying the Bible and seminar material with Abby and Daniel from the beginning. When he noticed their absence from church, he called, then drove to Daniel’s apartment. When Daniel admitted their situation, Burkhardt smiled. “God still loves you,” he said. “He doesn’t want to lose you, and neither do we. Please, come back to church.”

They prayed together and Burkhardt left, encouraging Daniel to come back to church with Abby. On a Sabbath morning not long after Burkhardt’s visit, they did just that. “The church was overwhelmingly supportive,” Abby says. “No one looked at us sideways, no one made us feel ashamed; they welcomed us back with literal open arms. There was no feeling of judgment at all, just a pure, unadulterated expression of God’s love.”

In December 2015, Daniel and Abby were married in the Tulsa First Church. Half of the attendees were church members. “They became our family,” Daniel says. “We thought we had no one, but they—and God—were there all along, waiting.”

Abby and Daniel now have two daughters, ages four years and seven months, and they remain very active in the church. Between the two of them they have filled multiple roles: Sabbath School leader, treasurer, Pathfinder director, ministry leader, deacon, and elder. “I want my daughters to see that working for God is not burdensome,” Daniel says. “I want them to grow up knowing what we didn’t: that joy and wholeness come from service to others and to God.”

Because of her own experience, Abby has accepted the call to minister to women walking a similar path. Together with the women’s ministry of the Oklahoma Conference, she has helped to coordinate weekend retreats, Bible studies, and group therapy. “It’s Bible-based professional healing ministry,” Abby explains. “I never want anyone to feel as lost and alone as I did, and I want them to know that there is hope, there is help, and there is healing in Christ.”

Their involvement in the church is just one part of their everyday lives. Abby is finishing up her final semester earning her degree in finance and accounting through the University of Tulsa, and Daniel is an auxiliary piper for a natural gas company. “We serve in roles that support us in our goals,” Abby explains. She chose to teach Cradle Roll because she had a child in the class. Pathfinders meets outside of work hours and fits into Daniel’s schedule, and is an opportunity for him to connect with other parents. They both find it encouraging to be around parents supporting each other.

“Our everyday lives revolve around our relationship with God and our call to serve him by serving others,” says Daniel. “Before I met Christ, I had no motivation to do anything for anyone but myself. Looking to the cross and seeing what Christ did for me despite my sinful human nature changed my perspective, and now it’s God first, family second, and others third.”

Their definition of “family” has also changed: It has extended to include Tulsa First Church. “They are genuinely our family and an important part of who we are,” Abby says with feeling. “God knew what He was doing. He gave us a purpose beyond our own, and our lives will never be the same.”

By Becky St. Clair. St. Clair is a freelance writer and lives in the Napa Valley area of California with her husband, Jason, and their three children, Kayla, Lizzy and Gabe.