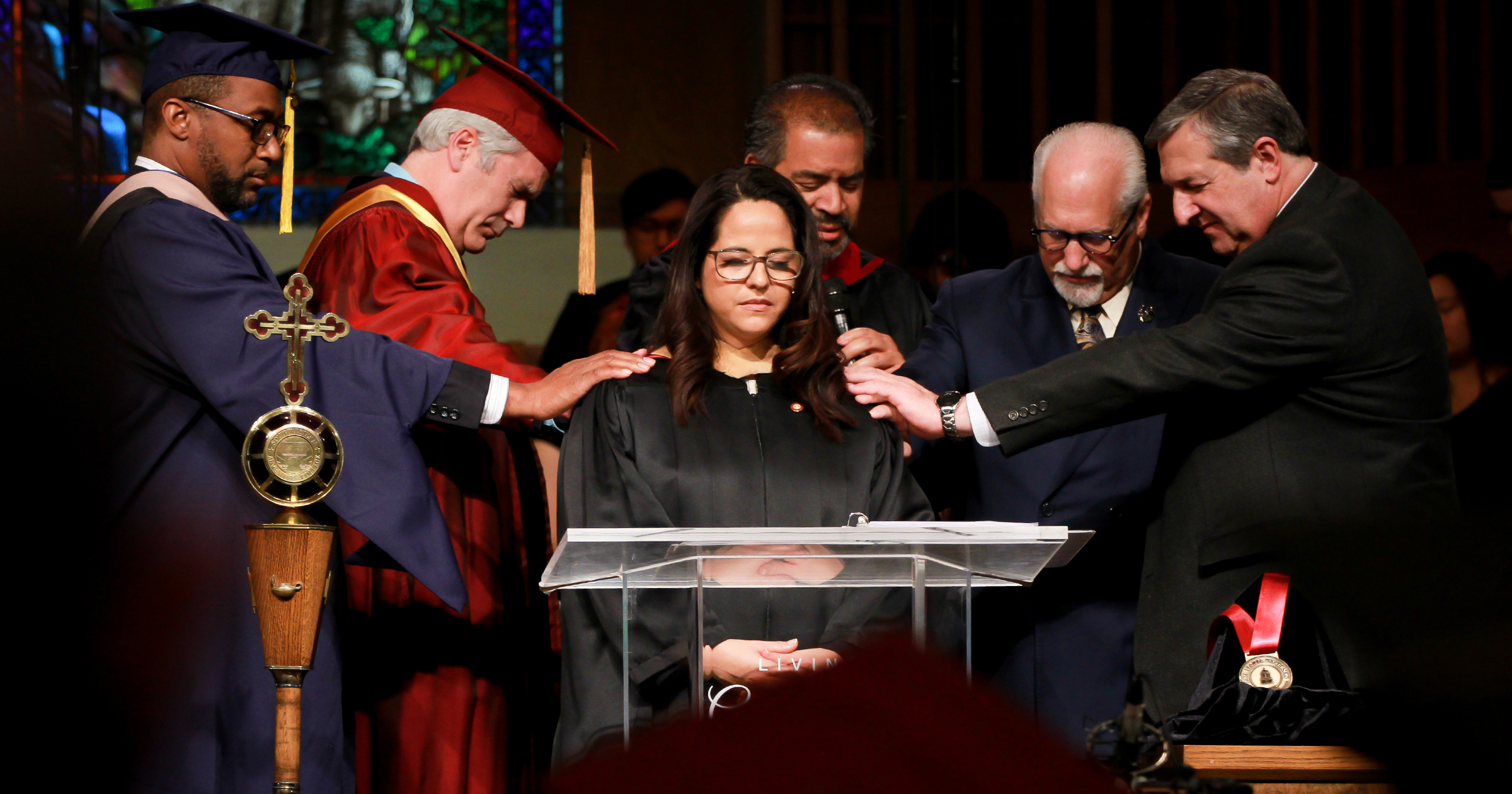 KEENE, TEX. – Southwestern Adventist University (SWAU) inaugurated Ana Patterson as its 26th president during a ceremony on March 1, 2022. Centered around Matthew 5:14-16, the theme of the inaugural celebration was Light of the World and celebrated Patterson’s vision for SWAU as a leader in high-quality, Christ-centered education.

The installation ceremony included greetings from the community, students, faculty and staff, North American Division of Seventh-day Adventists (NAD) and SWAU Board of Trustees by (respectively) Gary Henrich, mayor of Keene, Tex.; Yu Hu, president of the Student Association; Mickey Johnson, president of the Alumni Board; Renard Doneskey, Ph.D., professor of English; Arne Nielsen, B.S., M.Ed., vice president for education at the NAD; and John Page, treasurer of the Southwestern Union of Seventh-day Adventists.

As chair of the Board of Trustees, Carlos Craig formally installed Patterson as the University’s next president. “By the authority invested in us, the board of trustees, we hereby install you as the 26th president of Southwestern Adventist University,” shared Craig to Patterson. “We pledge our unwavering support to you in this all-important task of leading this university forward under the direction of the Holy Spirit.”

In Patterson’s inaugural address, she took the opportunity to acknowledge and appreciate the Board of Trustees, the faculty, the staff, community leaders, church, friends, family, students and those who were attending the inauguration virtually online. She spoke about the brave Southwestern pioneers who came to Keene nearly 130 years ago with the mission to create a place for Adventist education and about the dedication of these pioneers to their calling.

“We are called to be the light of the world at Southwestern Adventist University, and our university is uniquely positioned to heed this call by providing not just Christ-centered but also Christ-forward education that models love for God and service to others,” shared the president.

According to Patterson, Southwestern is called to be a shining light to the community, build a strong foundation of values and inspire the next generation in knowledge, faith, and service. She concluded by casting her vision that the light of God would guide Southwestern in this new chapter.

Patterson’s installment is historic for SWAU as she is both the university’s first female and first Hispanic president. Prior to assuming her responsibilities as president on July 8, 2021, Patterson worked as the special assistant to the president for the university. She has nearly a decade of teaching experience as a business professor at the university, served as chair of the university’s diversity and inclusion committee and was named Educator of the Year for the 2016-2017 school year. She has been an active member of the community surrounding the university for the past two decades, acting as a board member for several organizations serving children and as president of the Children’s Advocacy Center of Johnson County’s board of directors.

A recording of the installation ceremony as well as photos from the day’s events are available at SWAU.edu/inauguration.