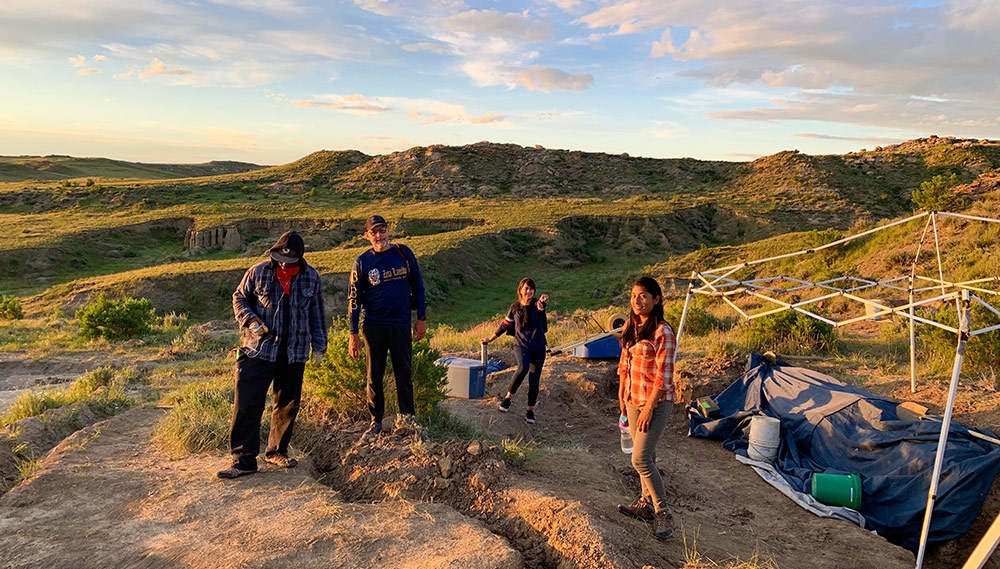 KEENE, TEX. – Each summer, the ongoing Dinosaur Excavation and Taphonomic Research Project, led by Art Chadwick and Jared Wood, moves from Southwestern Adventist University’s biology department to the 8,000-acre Hanson Ranch and Research Center in eastern Wyoming. This year, 120 participants from around the world participated, including 10 international educators from the Philippines, Argentina, Peru, Italy, Nigeria, Puerto Rico and Korea.

Jared Wood, project co-leader, professor and zoologist, said approximately 2,300 bones were discovered and they had a new record average of diggers per day. “Our numbers continue to grow. We’ve gone from having three people the first year to about 50 people per day from around the world.”

In January, Southwestern was recognized in the Journal of Paleontological Sciences for its work with the Upper Cretaceous Hell Creek and Lance Formations, which are some of the most fossil-rich rock units in the United States. Southwestern was named among five universities that “stood out as providing the most detail in the easiest and most aesthetic format.” Southwestern “provided photographs, historical and geologic context for just about every specimen in the large and mostly complete database.”

Wood added, “I was told this summer by a paleontologist that we had the largest collection of Lance Formation fossils in the world. And we have the best collection of general [fossils], like  Edmontosaurus, which is a type of duck-billed dinosaur. We always thought we had the best, but now it’s been justified. It’s pretty amazing, for a school our size, to have this world-class collection.”

The Hope Channel will release a six-episode documentary on the project, directed by Southwestern communication professor Paul Kim, in November. Viewers will get a glimpse of the camp, the dig and the wilds of Wyoming. With its Dinosaur Science Museum housing a world-class collection of over 30,000 bones and ever-increasing media exposure, the project is drawing unprecedented attention.

For more information on the Dinosaur Research Project or to schedule a group tour at the Dinosaur Science Museum, please visit us online at
SWAU.edu/DinosaurMuseum.