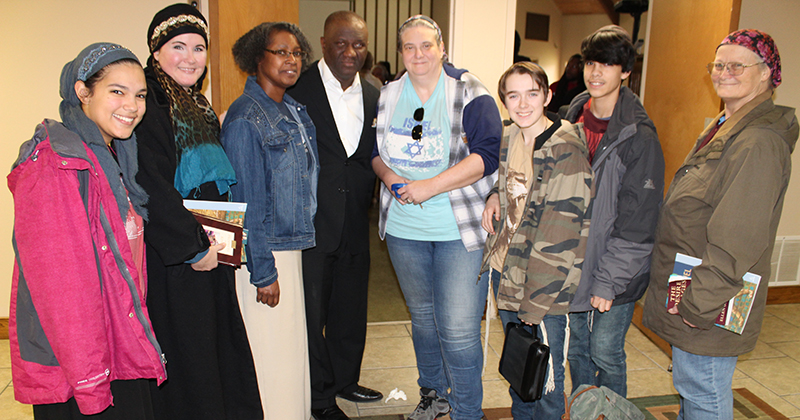 BATON ROUGE – Published in 1892 and printed in 1896, it has the distinction of being the most popular and most widely read book by Ellen G. White, and 128 years later, Steps to Christ is still wielding its influence as evident recently at the Berean Seventh-day Adventist Church.

It began with a family of three adults and three youth who utilized social media to find their way to Berean, arriving in time for Sabbath School. We would learn that the group is Seventh-day Adventist from a Jewish community who formerly resided in Arizona but were relocating to Jerusalem. During the 11 a.m. service, T. Ron Weegar, pastor, invited the family up where he acknowledged them, invited them to speak and posed with them for pictures–even receiving a future invitation with guaranteed housing for him and Mrs. Weegar.

Following the service, one of the ladies approached Weegar about copies of Steps to Christ. Feeling overjoyed at the request and oblivious to its reason, he asked his wife to bring the books and stamp each. The lady was quick to announce that she and the others were anxious to get started with their distribution to the Berean community. We said our goodbyes and bid them well–only to be surprised at their return that night for the conclusion of our ‘Friends and Family’ weekend. At the end of the service, they requested more Steps to Christ, which Weegar didn’t hesitate to provide. And again, we embraced for what would be the last time–for now.

On the following Sabbath, during the 11 a.m. service, an excited Weegar called up a young adult first-time worshipper and introduced him as Trevin Blackmore. Weegar asked Blackmore to share the testimony that he had shared with him. We learned that the 30-year-old had been visited by the family of six and received a Steps to Christ copy, along with a personal invitation to Berean church. “They even prayed with me,” said Blackmore. “I feel like I’m in heaven right now. I go to my church and pick up others on Wednesdays and on Sundays, but from now on, I’ll be here on Saturday,” he said to the applause of the congregation. Weegar eagerly replied, “You’re going to be my road dog from here on–since I can’t see [a reference to his visual impairment] and you can. We’ll pick up people along the way as you’re doing now!” True to his word, since reporting that first Sabbath, Blackmore has not missed a service–including Sabbath School, where he is involved in the lesson. The Holy Spirit led a family to the Berean church with a desire to share a little powerful book, and then led them to Blackmore. We have not heard from our new friends, but pray that they arrived safely and that all is well as we praise God for their zest for souls.