A Story of Faith, Community and Relationships 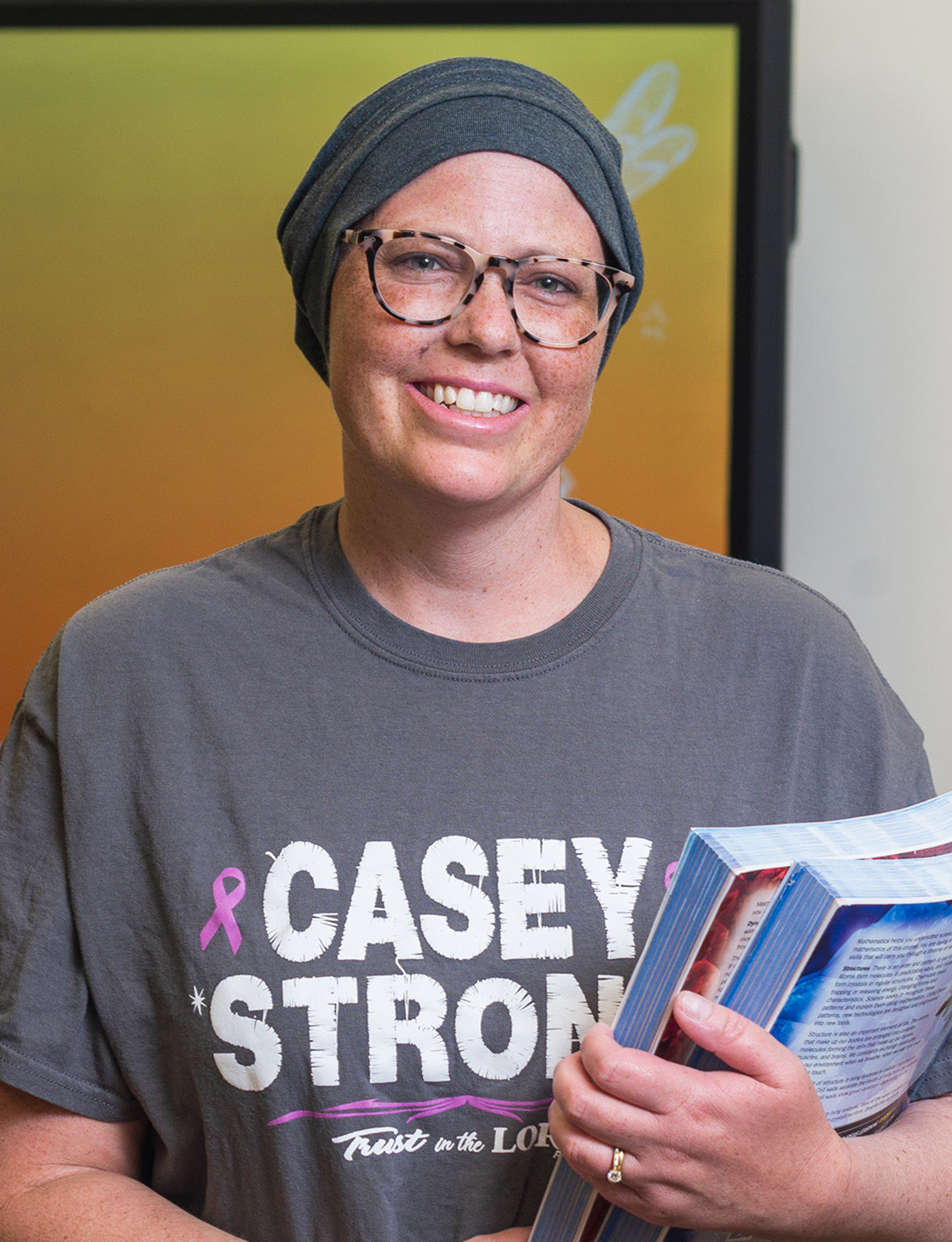 In 2016, Casey Harris beat cancer. Amidst the nightmare that was 2020, it came back for another fight. But this time Harris, now principal at Sandia View Christian School (SVCS) in New Mexico, was ready for it.

Harris joined SVCS in 2018 and she absolutely loved her job. “There is nothing as great as these kids,” she gushes. “Their parents are phenomenal, too, always wanting to help and make things better for the school and their kids. They regularly come in after school to make sure I got a hug that day, and frequently text that they’re praying for me and for the school. It’s a very close-knit community.”

Her colleagues, she says, are also friendly, helpful and wonderful to work with. Harris came to SVCS from very small schools where she was the only teacher, so coming to SVCS where she has a staff of five was a real gift. “I love it here, and I don’t know why I’m so blessed to be a part of it,” she says.

When her cancer came raging back, Harris was eventually forced to go out of state for treatment. Due to the pandemic, no one could accompany her—not even her husband. From November 2020 to February 2021, Harris received treatments in an isolated hospital room, connected to her family and friends only via technology, spending the holidays alone but for the hospital staff.

But, in reality, she wasn’t really alone at all. “When I say SVCS has a family atmosphere, I’m understating it,” Harris insists. “There were times I’d be lying in my hospital bed and my boys would text that they needed a ride somewhere. All I had to do was shoot a text to a few moms from the school and almost always every single one of them volunteered to get my sons where they needed to go.”

Though they’d only been at SVCS a short time, Harris says her family was preparing to put down roots. They had begun developing friendships within their community, and were prepared to stick around for the longhaul. Leaving that community when she needed them most was devastating to Harris. But they never left her.

An anonymous donor paid for their sons’ tuition for the entire year so the family could use their money for medical bills. The SVCS community chipped in and bought her a brand new laptop so she could easily talk to people from the hospital in Denver, Colorado. The home and school group did fundraisers to contribute toward the Harris’ medical expenses. At Christmas, the entire school made and sent Christmas cards, and several people sent homemade slippers and blankets.

“Many of those cards were glittery and full of pictures in crayon,” Harris recalls. “Being able to have those connections when I was so isolated from actual human contact meant so much to me.”

Perhaps the most touching gift Harris received was when the home and school group revealed their Friday t-shirt design for the 2020-2021 school year. “The kids wear uniforms every day, but on Fridays they’re allowed to wear school t-shirts, and every year there’s a new one,” Harris explains. “When they revealed this year’s design, which said ‘Casey Strong,’ I burst into tears.”

Funds from the sale of these t-shirts went directly to the Harris family, and every Friday the entire school declares their support of Harris on their shirts. Harris says that the first few times they received checks, she sat down and sobbed, not knowing what else to do. Her mom told her: “Casey, just say thank you.” So she did.

“One day I sat down to write thank you cards and I wrote 70 in one day and had to call my dad and ask him to send me another box of cards,” Harris says incredulously. “My community has given me so much.”

Though Harris is back home now, her oncologist insists she cannot leave the house until her immunity is back to normal. She hopes to fully step back into her role as principal this fall. For now she attends church online and waves at colleagues, parents, friends and students through her car window when she picks her sons up from school every day, relishing being in the presence of people again.

“There are people who say that they can worship God anywhere. And that’s true, but that’s not all church is,” Harris points out. “When you get to share your burdens with others, there’s nothing in the world like having that support and comfort. We need that community of people, too.”

During her time in the hospital, Harris said there were days she was too angry to pray for herself. In those difficult moments, she would ask her community to pray for her. “It was so comforting to know that even though I couldn’t pray, my community was doing it for me,” she says. “It’s very healing to know you’re part of a community, that you’re valuable and that when you return, they’ll notice.”

It’s experiences like this that bring home the purpose and value of Adventist education for Harris: An exceptional, powerful community that lifts each other up in their darkest hours.

Texico Conference Superintendent of Education Derral Reeve agrees. Of his own personal experience he says, “Seventh-day Adventist education is part of my family culture; my parents and siblings have a combined 156 years of going to Adventist schools. But it has become more than just a family tradition. It has become a force that draws the students, parents and churches into an interrelated community so strongly that they become a real family.”

SVCS embodies this idea perfectly through its mission, vision and practice. “At SVCS, we really focus on making sure the school is relationship-focused,” Harris says. “We’re teaching kids to have a relationship with Jesus, and the only way to do that is to demonstrate what ‘relationship’ means. SVCS is brilliant at that. God reached out to me when I needed Him most, and He did it through my relationships with my school and church community. There’s nothing I can do in return except say thank you.”

By Becky St. Clair. St. Clair is a freelance writer and lives in the Napa Valley area of California with her family.