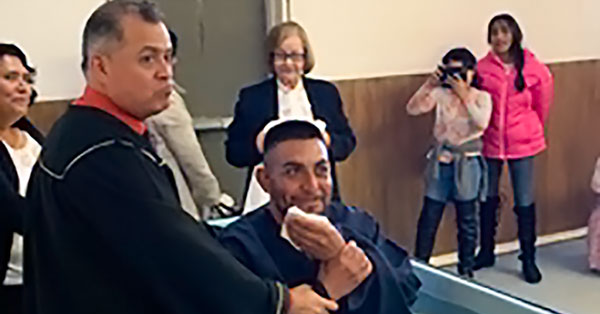 ALBUQUERQUE – “The last time I went to the casino, I won $2,000. I was going to use it for a deposit towards a car I wanted. I wanted to double that amount, but instead I lost everything. At that point, I thought about taking my life because I felt it was not worth living.”

These are the words of Daniel González, one of La Roca Seventh-day Adventist Church’s newest members. I first learned about Daniel during La Roca’s Wednesday night prayer services. His mother, Carmen Gonzalez, would faithfully pray for him to return to church. I later learned that Daniel had led a rough life.

Although his parents tried to instill in him good behavior and a love and respect for God, life on the streets of Albuquerque was more appealing.

By the age of 19, Daniel was an avid gambler, drug addict and alcoholic. He was married and had two young girls, but the life of addiction took a toll on his family and it was not long before his marriage ended.

Shortly after his divorce, his sister died of cancer. These challenging events led him to fall deeper into alcoholism and drug addiction.

One night, he dreamed that he was in a casket and he could see his mother, brothers and daughters crying. He knew he needed to do something to change.

“I cried out to God that night,'' said Daniel. “I told Him that I needed help and wanted to change but I needed Him to send someone with a Bible that could lead me to Him.”

It didn’t take long before that prayer was answered. One day, members of the La Roca church, Isaac and Ruth Flores, came knocking on Daniel’s door, and they came with Bible in hand. They began studying the Bible with Daniel.

Daniel continued to struggle with his addictions, and there were some days that he was hungover during their study, but Isaac and Ruth continued to pray for Daniel, asking God to help him. It wasn’t long before Daniel decided to be baptized and began attending church.

“I felt happy because my life was improving and I was no longer using drugs or alcohol,” said Daniel. “However, I couldn’t stop gambling. I would sneak off to the casinos and would lose my entire savings and paychecks.”

Over time, the guilt of his gambling addiction became overwhelming. Daniel felt like he was unworthy to come to church, and he stopped attending.

On the night that he lost $2,000, he began to feel like his life was not worth living, and thoughts of taking his own life raced through through his mind. However, he was reminded that the God who helped him stop using drugs and alcohol could also help him stop gambling.

That very night, he knelt before God and he recalled the songs of faith and hope he sang in church. His favorite scripture also came to his mind, “The Lord is my shepherd, I lack nothing.” Psalm 23:1.

On Nov. 16-23, 2019, the La Roca church held an evangelistic series with Luis Prieto, pastor of Tulsa Spanish Seventh-day Adventist Church in Tulsa, Okla. The series theme, “A Time for Decision,” was providential for Daniel.

He made a decision and came night after night and also brought friends and family with him. On Nov. 23, 2019, Daniel decided to once again accept Christ as his Savior. He left the pain and suffering brought on by his addictions in the baptismal water.

Although Daniel’s decision was enough to cause joy in the church, La Roca members were also thrilled that Daniel’s children, Valerie and Matthew, were also baptized.

“I realized that God never abandoned me despite all the wrong decisions I made,” said Daniel. “My advice to people is that if you are close to God, never turn away. But if you are far from God, seek Him. God is good and always gives us a new opportunity.”