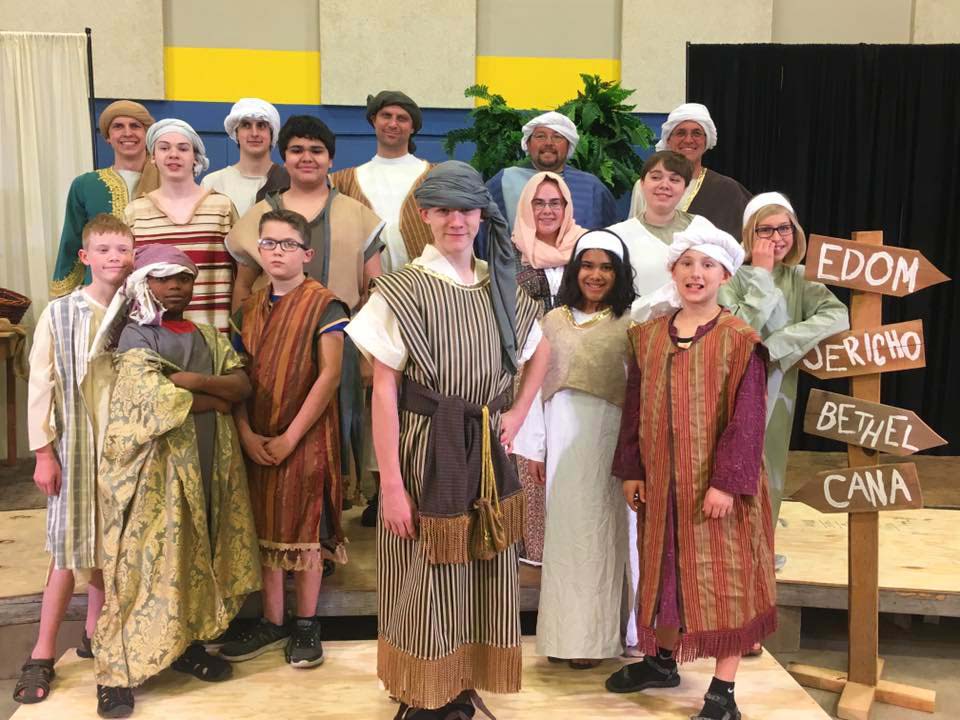 BENTONVILLE, ARK. – On February 18, Beaver Brother’s Productions, a ministry of the Bentonville Beavers Pathfinder Club, brought the biblical story of the prodigal son and the good Samaritan to life on the stage. Entitled “The Hitchhiker’s Guide to Jerusalem,” the drama was an original retelling of four biblical parables intertwined into one: the prodigal son; the good Samaritan; the parable of the workers; and the  marriage feast.

The cast members (pictured below) included staff and members of the Pathfinder Club. They practiced for nearly two months, three times weekly, in preparation for this event.

Staff members pitched in to make the production a success. Beth Huff, director of the play, designed and created all the period costumes for the production, managed the sound booth and created all the sound effects. The club director, Audra Kohltfarber, and staff member Jan Huff, helped Pathfinders learn their lines, cues and placements and taught correct inflection and pronunciation.

Diana Upton and D’arcy Dunn, backstage managers, made sure all the scenes were cleared and new props were placed and ready. Michael Dunn ran the lighting controller to create scene breaks and lighting effects and TJ Hopper ran the overhead house lights. Steven May, who played the land owner’s foreman, and Shawn Kohltfarber, who played the prodigal son’s father, also helped to build the set.

Nearly 100 guests from the community and neighboring churches attended. The Jerusalem-inspired dinner of Mediterranean foods was served during intermission. Chefs Roger Huff, Renee and Jeff Otts, and Sarah and JR Otts worked for nearly two days to prepare the meal. It was served in a Jerusalem market setting. Guests, who had been provided with small sacks of “Denarius,” visited food stalls to “purchase” their meal with the coins.

The performance can be viewed online by going to YouTube.com and searching “Pathfinder Strong Channel” and then clicking on the “Valentine Banquet Productions” playlist. Special thanks to Tanya Hopper for recording the performance.