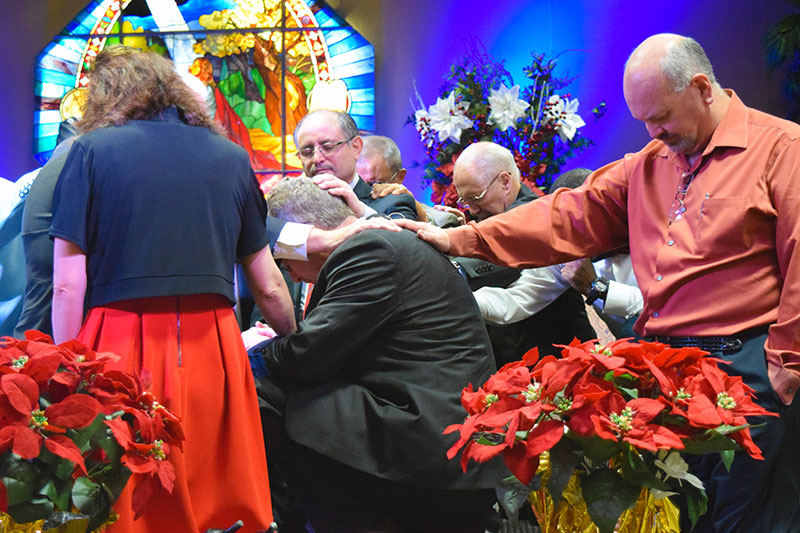 AMARILLO, TEX. – On Dec. 15, 2018, the Amarillo Seventh-day Adventist Church was happy to witness the ordination of its pastor, Bobby Harris. During the special Sabbath morning worship service, Texico Conference leaders Phil Robertson and Lee-Roy Chacon performed the ordination ceremony and many of the members were surprised to learn that Harris had a unique story of how he became a pastor. During his message, Chacon recounted Harris’ journey.

According to Chacon, in 2006, Harris heard God’s voice while he was dolphin watching in Virginia Beach, Va. Ironically, he was visiting Virginia Beach on a quest to find a cure for his Parkinson’s diagnosis from a well-known psychic who was famous for his holistic medicine approach. But more than healing, Harris was searching to find a purpose for his life. God took that opportunity and spoke to him and told him, “I want you to be a pastor.”

Baffled and resistant Harris responded, “But God I don’t even own a Bible!” Meditating on the experience he purchased a Bible and started reading and studying scripture. To his wonder, the first Bible text he ever read was Isaiah 43:10, “You are my witnesses,” declares the Lord, “and my servant whom I have chosen, so that you may know and believe me and understand that I am He. Before me no god was formed, nor will there be one after me.”

It was then that Harris knew that he had found what he was looking for. God called him to something bigger and better than he could have ever imagined. Following that experience, God led Harris to Southwestern Adventist University in Keene, Tex., where he studied and graduated with a bachelor’s degree in Theology. Since then, he married his wife Maria, has served as a pastor in Alaska and is now serving in the Texico Conference.

“The story of how God found Harris is simply incredible,” said Phil Robertson, Texico Conference executive secretary/treasurer. “Not only did God call him into a relationship, He also called him into a lifetime of ministry service.”