Light to Others in a Dark World 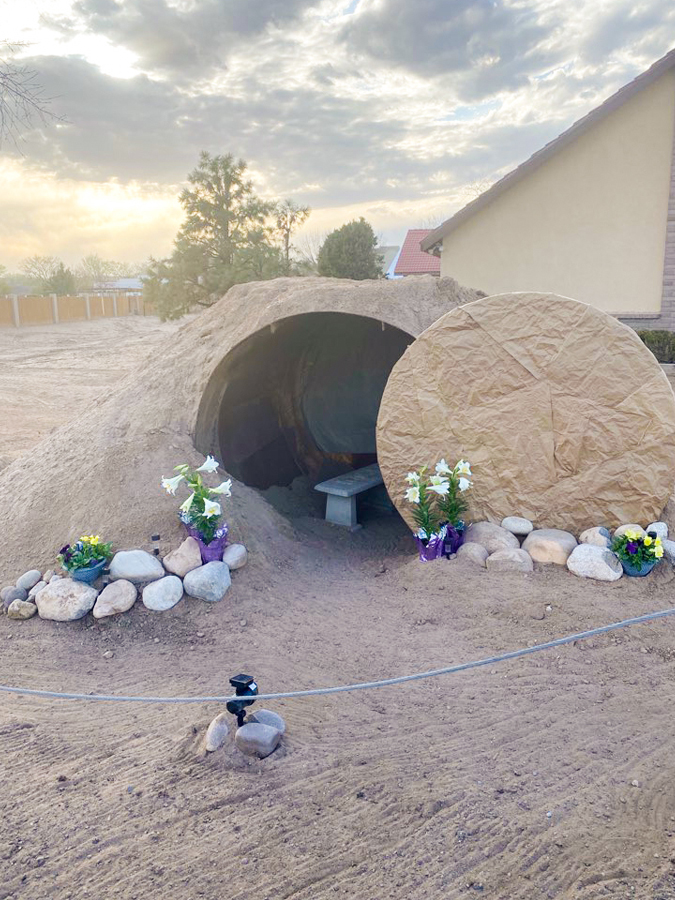 CORRALES, N.M. – After the Sabbath, at the dawn of the first day of the week, a small group of believers stood outside of Jesus’ tomb. It was empty except for strips of linen lying there.

While reminiscent of this glorious scene over 2000 years ago, this particular experience took place this past Easter morning at the Corrales Seventh-day Adventist Church. However, the small group looking into the empty tomb was a family from a neighboring community who made it their plan to visit a resurrection display that the Corrales Church had created as part of their Easter celebration. The display featured a large empty tomb and three crosses. The week before, the father of the family said he had been watching the scene being constructed while on his daily commute to work and back home. He told his wife, “That’s where we are going on Easter morning!”, and they did. While barely light on Easter morning, the family stood with an open Bible before the scene, recounting the story of our Lord’s great sacrifice and victory on mankind’s behalf.

Many others in the community were also touched by the display, one even taking the time to write to the church to express how thankful they were to have this beautiful reminder of God’s great gift as they passed by each day. The idea of the empty tomb scene came to me as I recognized the need for churches to raise the banner of hope to a fearful world after the events of 2020 and 2021.

We know that God was behind this project as people, to help, and the material, to build the display, were easy to come by. Fellow church members Al and Lydia Montes de Oca jumped in enthusiastically and built the crosses, and I had no trouble getting assistance from my family as well as students from Sandia View Academy.

For two weeks, travelers in either direction saw signs proclaiming, “HE IS RISEN!” and then were led up to the scene of an empty tomb. My hope is that we may keep His victory over sin and death ever before us and be a very visible light to others in a dark world.