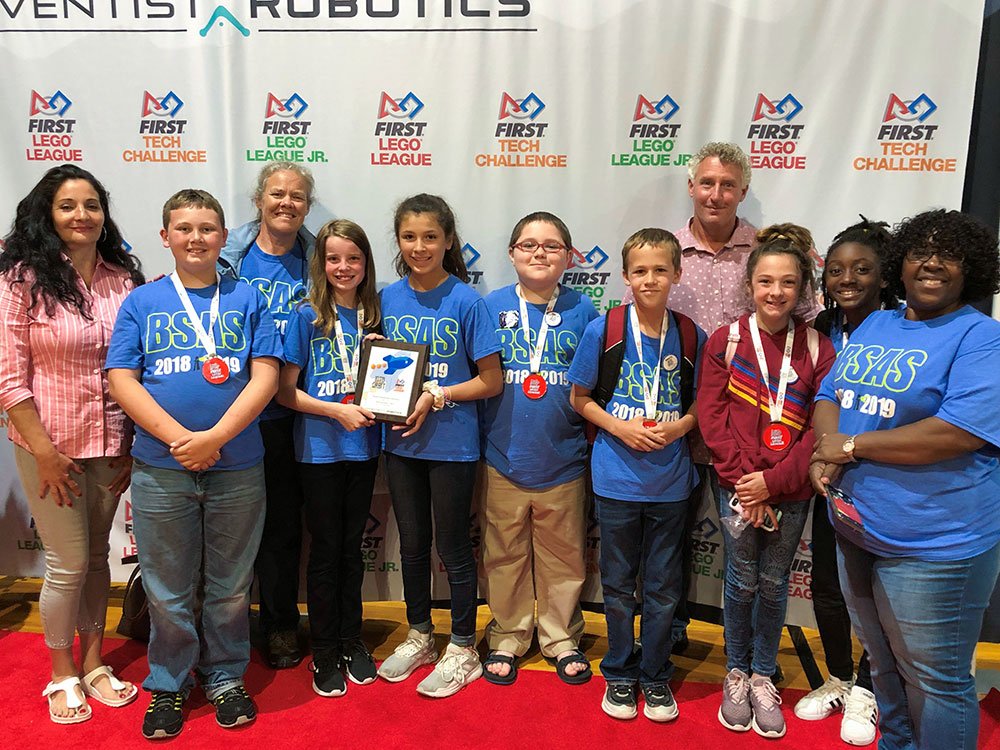 BENTONVILLE, ARK. – In 2018, Renee Otts, principal of the Bentonville Seventh-day Adventist School, heard Mel Wade speak about Adventist Robotics. The students already cultivate a garden and participate in environmental community projects but Otts wanted to create a STEM emphasis. She had been praying and looking for ways to find a niche for the school in the community and was interested in the Robotic idea but felt inadequate to lead out. However, volunteer Priscilla Glasgow has degrees in computer engineering and mathematics and she offered to volunteer as needed. They have been unstoppable since!

Bentonville Seventh-day Adventist School received a robotics grant from the Southwestern Union as well as a grant from McKee Foods to start the program. The school joined the Adventist Lego First Robotics League and made a team of seven 5th and 6th grade students, with the addition of Otts, Glasgow and Angela Carvajal. The team met every Friday for two hours of Lego Robotics work.

In December 2018, the team became aware of the regional competition at Oakwood University and stepped out in faith to begin planning. They raised the funds necessary at their International Food Festival in January 2019. In March 2019, they headed to Oakwood in a rental van. The competition began on Sunday, March 15, with 28 teams from the Southern region. The Bentonville team had no idea what to expect and came in completely wide-eyed.

There were three presentations that each had to give: First, Project – they were required to pick a problem that related to the theme “Into Orbit.” They chose two problems and researched a solution to solve both. Second, Core Values – this presentation was based on the core values that come from the LEGO League: Inclusion, Fun, Team Work, Innovation, Impact and Discovery. Team members shared with judges how each value was used to create their projects and to accomplish their missions. Third, Robotics Design – this presentation showed the judges the designs the students came up with in creating their robots and completing missions. Our students had practiced well and felt confident in their presentations.

The Robot Mission competition is very exciting and scary! Students were given a two and a half minute practice round. Every team was given the same supplies to work with and had to design any equipment their base robot needed to complete a variety of missions in the time allotted. There were about 15 different missions with a variety of points awarded. During the practice round, Bentonville’s robot failed to complete the mission it had been programmed for. The team diligently worked on the program between rounds and in Round One they completed the mission and gained 12 points. The judges were very gracious in giving feedback and encouraged the students after each round to try different strategies for more points. With some quick ingenuity, the team scored 62 points at the end of Round Three putting the Bentonville Muscibots in 11th place. They were ecstatic!

The team was awarded 1st Place in the Project Presentation and 2nd Place in the Core Values Presentation! After the champions were announced, Bentonville was selected as one of the teams to present at the National Competition at Forest Lake Academy in Florida. More fundraising and much practice in perfecting their presentations, while adding more missions to their robots was the order of the day. The Bentonville Muscibots made it to the competition on May 5, 2019 and they received 2nd place for their project. All were very excited!

Bentonville Seventh-day Adventist School is striving to give students opportunities that larger schools cannot provide. Through unique and diverse experiences we want our students to leave well prepared to make a difference in this world and be prepared for Christ’s soon return. We have stepped out in faith on many ventures and God has blessed us. We can’t wait to see where God takes us next!