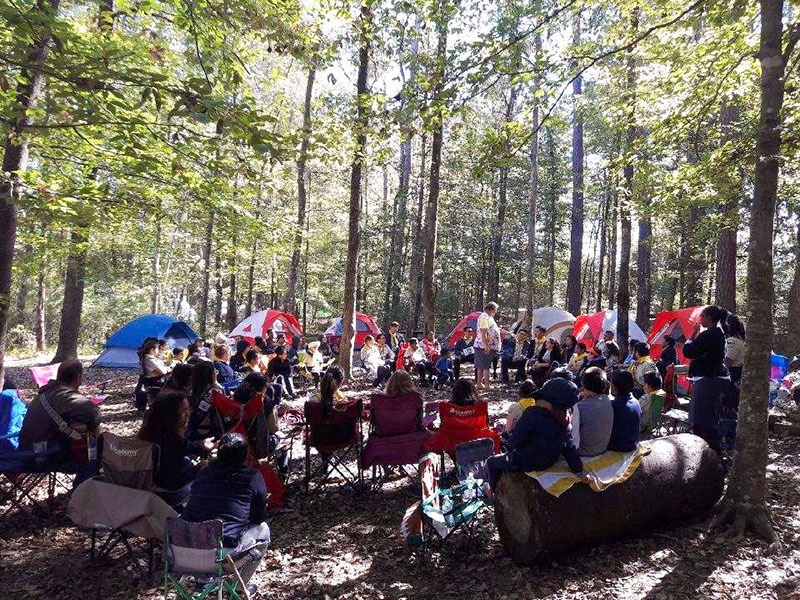 SHREVEPORT, LA – “Surviving the Wilderness” was the conference theme for the four area camporees held Nov. 2-4, 2018. The main theme depicted the children of Israel in the wilderness and how they survived under God’s leadership, but the secondary theme was that the only way we will survive the wilderness of this world is under God’s leadership, protection and guidance.

Ross Harris was the camp pastor and visited club campsites and assisted with activities as well. The entire group was divided into the 12 tribes of Israel and each tribe was identified by a different color bandana. Saturday night closed with a worship and a roaring bonfire with the usual roasted campfire delicacies and an unforgettable “junk scramble.”

Central Arkansas camped on the ball field at Camp Yorktown Bay with 117 Pathfinders and staff. Campsites were set up on Friday and at vespers, all the children of Israel gathered in the center of camp to hear the first part of the story of Moses.

Sabbath morning started with a camp inspection followed by a parade. Sabbath School was a continuation of the story of the Israelites leaving Egypt. The story stressed that the pillar of cloud by day and the pillar of fire by night was God Himself. The break between Sabbath School and church featured a short puppet show starring Moses and Pharaoh. “You ain’t seen nothing yet” Moses kept telling Pharaoh as the plagues kept coming upon Egypt.

Sabbath afternoon was spent doing honors. Camping Skills I, II and III, Camp Craft, Bats and Reptiles were taught. After vespers, the weather turned bad. Shortly after dark, all the campsites were empty and all the clubs left before the storm hit. The Camp Director told us later that the lightning became very bad and it was wise not to be in a tent.

South Arkansas / Central Louisiana held their camporee on the Gifford property by the old Shreveport school. About 50 Pathfinders, Teen Leaders In Training (TLTs) and staff from the Texarkana and Shreveport Clubs came together to “survive the wilderness.” Area Coordinator Helen Rodriguez had Pathfinders working on camping skills honor requirements with Bill Grant leading out in the cold weather survival honor. Vespers and church services were held around a large fire. Tony Cash and Fernando Villegas were guest speakers. Singing, praying and opening the Word reminded us of God’s leading in the past with the promise that God will lead us today. Heavy rains the second night revealed any leaky tents and challenged the fire building class on Sunday. Together we learned that with God we can survive the wilderness.

South Louisiana had 100 Pathfinders and staff from the Baton Rouge, Metairie Spanish and New Orleans East Spanish Clubs gathered at the Percy Quinn State Park in Mississippi for the area camporee. It was a great weekend; the weather was good. After camp inspections, then church and lunch, we had a scavenger hunt, went on a nature hike and earned the Worm Honor. The Clubs had a great time mingling and getting to know each other. Activities were planned for Sunday, but it threatened rain, so all the clubs packed up and left just in time.