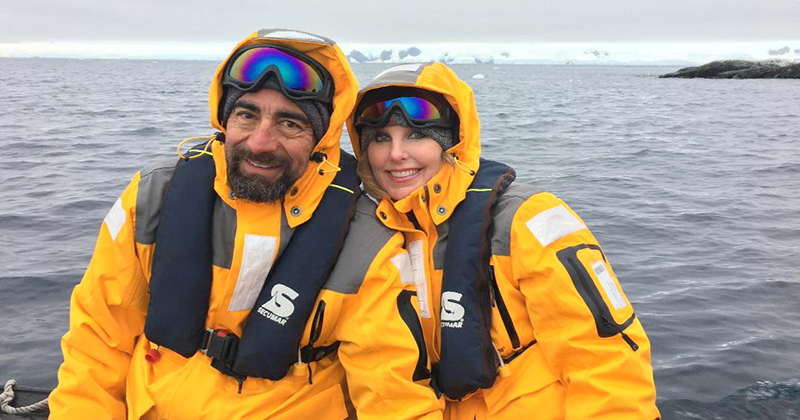 ALBUQUERQUE – My husband Ray and I are very passionate about traveling, so when we had the opportunity for a trip to Antarctica in early March, we were thrilled. Although we were hearing reports about coronavirus COVID-19, we safely arrived in Buenos Aires, Argentina on March 6, and found the city bustling, alive with tourists and activity.

We met up with our fellow expedition passengers and boarded a charter flight to Ushuaia, the southernmost tip of South America. There we boarded the Ocean Endeavor and set sail to our final destination. As we settled in, we met two wonderful people, Dwight and Prime, and they became our travel companions for the rest of the trip. We affectionately called ourselves the “seal team 4” because we looked out for each other.

In due time, we were exploring the beautiful outer islands of the Antarctic. It was vast and stunning. However, near the end of our tour, we were notified that we needed to head back to Ushuaia because the Argentinian government had issued a national lockdown due to the heightened threat of the COVID-19 pandemic.

As we approached Ushuaia, we were notified that all travelers entering the country needed to undergo a 14-day quarantine. But since we had already been in remote isolation, we only had to quarantine on the ship for five days. The ship’s administration spent the next few days negotiating our permission to disembark and board a charter flight to Buenos Aires.

On March 22, half of the passengers were allowed to come ashore and we were quickly loaded onto buses and escorted to the airport by police. Upon arriving, we were met by armed officers and medical personnel dressed in full protective gear.

The mood was tense— each passenger kept a safe distance from one another and was screened for fever and virus symptoms. On our flight to Buenos Aires we had no contact with flight attendants.

After clearing individual health screenings in Buenos Aires, we were allowed to go to a hotel. As we drove through the city, we were very surprised by how much things had changed since our last visit. With the exception of a few essential businesses that were operating, the streets were empty. Sometime later, we returned to the airport and learned that our flights had been cancelled and, due to travel bans, the only flights out of the country were three “Humanitarian Flights” per day.

I prayed fervently for the Lord’s intervention and felt at peace that He was in control. Fortunately, two ticket agents spent extra time helping us, and they were able to get flights out of the country for us and for our friends. I praise God for His divine help! Still, God had many more blessings in store for us.

That same day we met a taxi driver named Angel, who promised to pick us up the next day for our flight. When we reached the hotel lobby the next morning, there were several hotel staff dressed in protective gear telling the guests to stay in the building. From afar, we saw Angel motioning for us to get into his taxi. He explained that city officials were not allowing taxis in the area, but he returned because he had made a promise to pick us up. En route to the airport we encountered roadblocks, police questioning and barricades, but we made it to the airport in time for our flight.

As I now reflect on this experience from the comfort of my home, I am reminded that we are all in God’s constant care and protection. There is nothing impossible for Him. We can be certain that we serve a powerful and loving Heavenly Father who is there for us, even in the most uncertain moments.